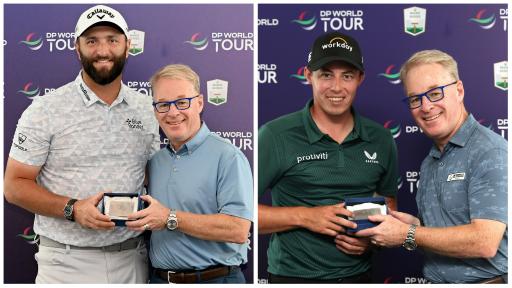 Jon Rahm and Matt Fitzpatrick, the last two US Open champions, have been presented with Honorary Life Membership of the DP World Tour ahead of the 2022 season-ending DP World Tour Championship.

In 2021, Rahm became the first Spanish winner of the US Open as he triumphed at Torrey Pines, birdieing the final two holes to finish one stroke ahead of Louis Oosthuizen.

He returned to World No.1 with his victory and became just the fourth Spaniard to win a major championship.

Earlier this year, Fitzpatrick completed a fairy-tale triumph at The Country Club, Brookline, winning the US Open at the same venue he won the U.S. Amateur Championship nine years prior – joining Jack Nicklaus as the only players to win both Championships on the same course.

Keith Pelley, the CEO of the DP World Tour, presented the pair with their Honorary Life Membership cards ahead of the final Rolex Series event of 2022, becoming the 58th and 59th members to be conferred the honour.

"Jon and Matt’s achievements over the last two years were truly special and we are delighted to present them both with Honorary Life Membership of the DP World Tour," said Pelley.

"Jon assumed the status of an Honorary Life Member of our Tour immediately after his win at Torrey Pines but with him not being here in Dubai last year, we were unable to make the official presentation – I am delighted to be able to put that right this year, alongside recognising Matt for his own magical US Open moment in June.

"Jon’s victory was an incredible achievement, becoming the first Spaniard to win the US Open and just the fourth major winner from Spain. And for Matt to write his name alongside Jack Nicklaus in golf’s record books is something that few golfers in history can claim to do."

Rahm said: "To join the list of icons that have earned this, it is truly an honour. Any time you can write your name in history next to some of the greatest players that have accomplished this before me is very unique. To keep doing things like this, it is a true honour to represent Spain and an honour to receive this."

Fitzpatrick said: "I’ve been out on Tour seven or eight years now and I remember when Danny Willett received his and I thought at the time 'I’d love one of those’. When I found out that I’d be presented with Honorary Life Membership by Keith and the Tour I was truly honoured. I’m very grateful."