But Rahm does believe LIV Golf should be awarded OWGR points, at least in some way. 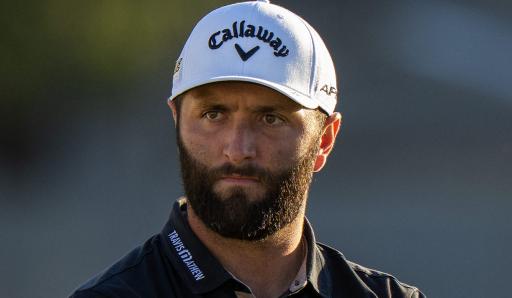 Jon Rahm wants everyone to "stop giving LIV Golf the publicity" because "they are not asking for it".

Rahm recently denied a rumour on social media that he was about to leave the PGA Tour and DP World Tour and join the Saudi-bankrolled LIV Golf Tour.

Following his latest comments to GolfMagic and the rest of the golfing media at this week's DP World Tour Championship, it would seem Rahm has very much had enough of all talk surrounding the rival tour.

"They are not asking for it. That's the first thing I'm going to say."

Rahm then gave his verdict on one of the big talking points on LIV Golf at the moment... no Official World Golf Ranking (OWGR) points.

LIV Golf recently merged with the little-known Dubai-based MENA Tour in order to try and get on board with the OWGR.

But even that decision failed (for now).

Unlike many others on the PGA Tour and DP World Tour, Rahm is not opposed to the idea of LIV Golf receiving some form of points.

Related: Sergio Garcia appears to have just revealed the NEXT LIV Golf signing!

If LIV Golf does eventually get on the OWGR list then Rahm, a former World No.1, believes "adjustments" should be made to the distribution of ranking points.

"I think a lot of people are against them having World Ranking points," added Rahm, currently ranked fifth in the world.

"I'm not necessarily against it but there should be adjustments. If your requirement is to have World Ranking points as 72 holes and a cut, maybe you don't award them 100% of the points sicne they are fulfilling all of the requirements."

The 2021 US Open champion considers LIV Golf must wait its turn, though.

"I also believe, it's probably a couple-year process, so they need to respect that as every other tour has.

Related: Here's why LIV Golf may not receive OWGR points (if at all) until 2024

Rahm also thinks the current OWGR system is unjust in the sense former World No.1 Dustin Johnson, who captained the 4 Aces GC team to a fifth victory at the season-ending LIV Golf Team Championship last month, is ranked 38th on the ladder.

Johnson, who was paid in the region of $150 million for joining LIV Golf earlier this year, earned more than $35 million in tournament earnings in 2022 despite only winning one individual title on the eight-season schedule.

"They do have some incredible players. To say that Dustin wasn't one of the best players this year would be a mistake.

"So I think they could be awarded. I just don't know where the math, how we could work it out. I don't know if they necessarily deserve 100%."

Rory McIlroy also weighed in on the current OWGR debate yesterday, citing he considered it the "fairest system" currently possible in light of LIV Golf's emergence this season.

He also could not help but stifle a laugh when considering LIV Golf's current headache.

McIlroy also called on LIV Golf CEO Greg Norman to be axed from his role.

He also gave his views on whether the European Tour legacy of his fellow Spaniard Sergio Garcia would be somewhat tainted following his move to LIV Golf.

Next Page: Rory McIlroy is a "voice of common sense" in a "messy" LIV Golf world, says Ryan Fox