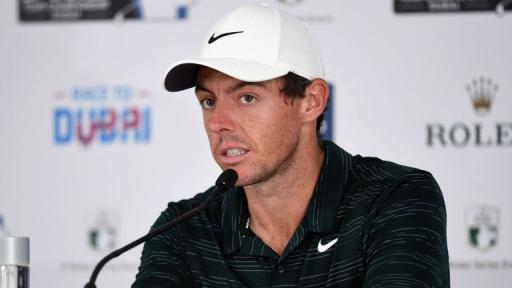 The world of golf can sleep easy again after Rory McIlroy has gone back on his recent comments and revealed he WILL continue to take up his European Tour membership in 2019.

McIlroy sent shockwaves through the European Tour offices last month when the former world number one claimed 'it's not the end of the world' if he was to lose his European Tour card next season.

"Everyone has to look out for themselves," McIlroy said at the time. "And next year, I'm looking out for me."

Had McIlroy declined his European Tour membership, he would have never been able to captain a European Ryder Cup side in the future - under European Tour rules.

According to reports, European Tour CEO Keith Pelley called for an urgent chat with McIlroy following his comments in a bid to ensure the four-time major champion would maintain his membership on both sides of the Atlantic.

Recently revised European Tour bylaws require players to play at least four events outside of the majors and WGCs.

Last month McIlroy was only ready to commit to two, at the Scottish Open and Omega European Masters.

McIlroy, however, appears to have gone back on his initial plans and is expected to add at least another two starts which are likely to come at the Omega Dubai Desert Classic, Irish Open or BMW PGA Championship.

The Northern Irishman will make his first ever start in Hawaii at the Sentry Tournament of Champions, the PGA Tour's lid lifter to 2019. The tournament features all the winners of PGA Tour events the following season, of which McIlroy qualified through winning the Arnold Palmer Invitational at Bay Hill.