Rory McIlroy has reaffirmed his comments about the European Tour's course set up. 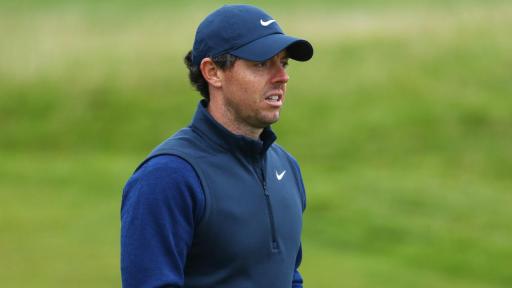 Rory McIlroy has made the headlines following his comments after Sunday's final round of the Alfred Dunhill Links Championship. He was extremely critical about the European Tour's course setup and on Monday morning McIlroy took to Instagram to clarify his comments.

Prior to the first round of the Alfred Dunhill Links, McIlroy made it clear that he was very excited for the team competition and the opportunity to play with his dad as part of his birthday celebrations and the pair very nearly won the tournament, falling just short of Tommy Fleetwood's team.

Pro-Am aside, McIlroy put together a fantastic solo score of 15-under par and following his final round on Sunday, the Northern Irishman made some very negative comments about the European Tour's course set up and claimed that they are making the courses "too easy."

McIlroy's 15-under score was only good enough to finish T26, with the winning score being as low as 22-under, made by first-time European Tour winner Victor Perez.

“I’m sort of honestly sick of coming back over to the European Tour and shooting 15 under par and finishing 30th," said McIlroy.

The Alfred Dunhill Links Championship is typically made a little easier for the week due to the Pro-Am format of the event, so the course doesn't play too difficult for the celebrities and amateurs, but that didn't stop McIlroy from grilling the European Tour's general course setup.

“I don’t think the courses are set up hard enough," he said. "There are no penalties for bad shots. It’s tough when you come back and it’s like that. I don’t feel like good golf is rewarded as well as it could be. ...

“I think if the European Tour wants to put forth a really good product, the golf courses and setups need to be tougher.”

McIlroy's comments received mixed reviews online and on Monday morning, McIlroy posted a message on his Instagram page, where he admitted that the Dunhill Links probably wasn't the best place to make his comments, but he still believes the European Tour needs to put more thought into course management and setup. Take a look at the Instagram post below.