What do you make of Rory McIlroy's latest outburst? 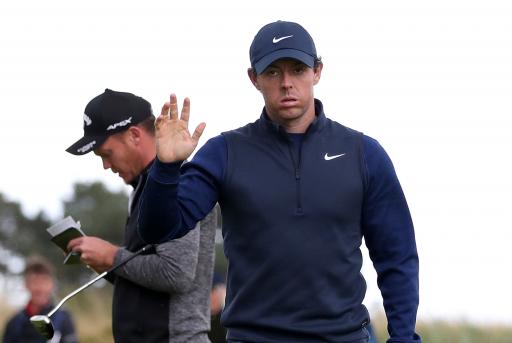 Rory McIlroy finished seven strokes behind Dunhill Links winner Victor Perez on Sunday but then sounded off on European Tour course setups not being tough enough... and it's fair to say his comments have not gone down well with golf fans on social media.

McIlroy finished in a tie for 26th in the professional tournament, but runner-up alongside his father Gerry in the Pro-Am tournament where he lost out to Tommy Fleetwood's team all because the Englishman had a better individual score than McIlroy's.

While clearly annoyed to lose out on the team prize in that manner, judging by his comments to Sky Sports Golf's Tim Barter, McIlroy then went on the war path by telling the media he is "sick of coming back over to the European Tour and shooting 15 under par and finishing 30th."

McIlroy was teeing up in just his fourth non-major/World Golf Championship start of the European Tour season, where in each of those appearances he has finished 11-under or better.

The Ulsterman's tie for 26th at St Andrews marked only his second finish outside the top-25, following his tie for 34th when shooting 13-under par at the Scottish Open earlier this summer.

"I don’t think the courses are set up hard enough," McIlroy told reporters after his final round.

"There are no penalties for bad shots. It’s tough when you come back and it’s like that. I don’t feel like good golf is rewarded as well as it could be.

"I think if the European Tour wants to put forth a really good product, the golf courses and setups need to be tougher."

RELATED: RORY REVEALS THE REASON HE SLAMMED THE EUROPEAN TOUR!

As you can imagine, social media was all over McIlroy's rant - check out some of the posts...

Rory McIlroy is making it impossible to like him. Since his Olympics decision he has turned into a very bitter man towards Europe and especially Ireland. He should seek solace and happiness he craves, and stay in the US permanently. Best for all going forward

This is why I have grown to dislike Rory McIlroy so much. It’s the same for all the players so if it’s so easy, why isn’t he scoring 30 under. Sour grapes I say, child like behaviour. Glad he’s gone from the ET #golf #RoryMcllroy https://t.co/rctsgmBzLH

What a bad loser. Personally I'm sick of Rory McIlroy.

I think it is very understandable to prefer the PGA tour and I don’t think @McIlroyRory will be back @EuropeanTour if it gets more difficult. However, It is also a bit of an insult to many great players on the European tour to say it is set up too easy... A no bueno statement

If the @EuropeanTour courses are set up that easy, why don't you shoot -25 to win the damn things instead of -15 and coming 30th @McIlroyRory...? You come across as a good guy Rory lad, just less whinging and more winning bro #UpTheIrish

@McIlroyRory his own fault for shooting -15! If the course was that difficult, the winner wouldnt be on -22! His own fault for being poor on the greens that week, sore loser in my mind

Rory McIlroy ripped the wrong Tour on the topic of easy courses. #pgatour is the prime culprit in this regard. Ridiculous comments; presumably he was in a bad mood having come so close to winning the Pro-Am with his father?

Excuse me @McIlroyRory ??? If it’s easy why are you not winning Yankee Doodle dandy Bhoy ??? Go back to USA and bore the fans over there please......

McIlroy played the required tournaments he needed to fulfil his membership on the European Tour, but he has spent the majority of his year on the PGA Tour where he went on to win a second career FedEx Cup following three victories during the season.

With a requirement on being a European Tour member in order to make the European Ryder Cup team, it will be interesting to see what decision the four-time major champion makes in terms of his membership in 2020.