Tyrrell Hatton shot 8-under par to climb up the leaderboard after a 4-over par first round at the Dubai Desert Classic. 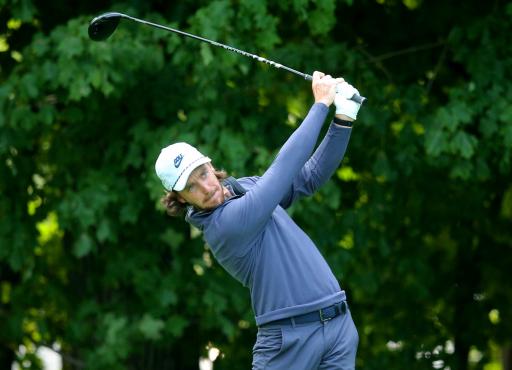 Thomas Detry leads the Dubai Desert Classic by one stroke after Friday's second round, but Tommy Fleetwood is just two shots behind, while Tyrrell Hatton produced a stunning 8-under par round to climb the leaderboard.

Robert MacIntyre holds second place with another fine performance as he makes his charge for a Ryder Cup spot, with a 4-under par second round to sit one shot off the lead.

"I felt I was out of rhythm early on, and we couldn't get any momentum within the group, which was difficult, but I hung in there and I putted great," said the Scot.

Sergio Garcia, who played brilliantly on Thursday, struggled with a 1-over par second round, although his daring line through the palm trees off of the 13th tee did lead to a birdie.

WATCH GARCIA'S STUNNING DRIVE IN THE VIDEO BELOW:

Fleetwood sits just two behind Detry after he produced his second 4-under par round of the week, whilst Hatton produced a sensational 8-under par round to move from near the bottom of the leaderboard, all the way to T23 and just six shots off the lead heading into the weekend.

The world No.5 mixed eight birdies with an eagle and two bogeys on Friday and at times had to keep his cool, despite frustration attempting to get the better of him.

Related Articles
You won't believe what odds Jon Rahm is to win Open de Espana!
How much did Ryan Fox, Rory McIlroy and others win at the Dunhill Links

At the par-5 13th, a delicate flop shot didn't go to plan for the Englishman and although his reaction was one of anger, he remained focused and rolled in his putt from the fringe of the green for a birdie.

Race to Dubai winner Lee Westwood shares sixth place going into Saturday's third round and he even took Fleetwood's caddie Ian Finnis by surprise when he went for the green in two at the last after missing the fairway from the tee.

"Finno thought I'd just hit wedge out of the rough and lay it up and knock it on, but I had a pretty nice lie and only 191 to the front, so went at it with a hybrid," said Westwood. "A bit of excitement in your life every now and again, it's good, isn't it?"

NEXT PAGE: Golf fans react to Bubba Watson's HILARIOUS exchange with his caddie on PGA Tour