Costa Navarino in Messinia, Greece will no doubt be recognised as Europe's best golf destination for years to come thanks to its golf courses, stunning views and impressive facilities. 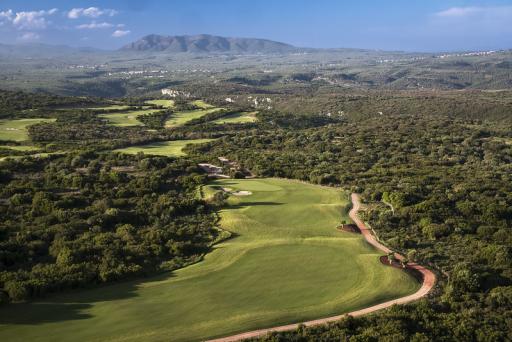 It is hard to know where to begin when describing Costa Navarino. Not only does this part of Messinia in Greece offer a stunning golf experience, but the entire destination is something to behold.

I was privileged enough to play in the Jose Maria Olazabal and Friends Pro-Am across two days at the end of November, but what struck me on arrival was the quality of the Westin Resort where I stayed.

The staff were extremely helpful and welcoming when I and my colleagues trudged in after a lengthy taxi transfer from Athens Airport. The lobby was pristine and if you walk through, there is a superb view of the beach and the Ionian Sea which is next to The Dunes Course.

I was shown the Romanos Resort on the trip and on my way to and from the golf courses each day, I saw the W Costa Navarino which was opened in August 2022. The new W Escape is set within a 13-hectare site, along a 450-metre-long sandy beach, overlooking the protected and historic Bay of Navarino.

Now for the golf, which didn't disappoint to say the least. On November 25, I played in the first round of the Pro-Am on the International Olympic Academy Golf Course which is the tougher of the two courses at Navarino Hills.

The two new golf courses at Navarino Hills are set on a plateau in the Kinigou Hills and overlook the villages of Kinigou and Pylos and the Bay of Navarino.

The International Olympic Academy Golf Course provided a very stiff test with strong winds. Accuracy with each tee shot was vital as a slight hook or slice would take you into the waste area, full of rocks and sticky mud.

The front nine circles the southern portion on softly-undulated terrain and leads through old olive groves in a typical Greek landscape. The back nine then plays along the edge of the cliff and provides spectacular sea views.

I started on the back nine in the shotgun start. The green of the 10th hole provided one of the best views I've seen on a golf course, overlooking the Bay of Navarino.

It was narrow and challenging, but extremely fair. There were multiple forward teeing options and roomy bail-out areas which catered for a number of different golfers.

"You will find the International Olympic Academy Golf Course to be more polished in style and full of spectacular views across the Bay of Navarino while the Hills Course offers more of a rural feel, where we take you out through the gently rolling hills," were the words of Jose Maria Olazabal.

"In addition to the two 18-hole courses, we have also built very generous practice areas for the long and short game which will be ideal for both the advanced golfers and beginners."

Olazabal, who spoke exclusively to GolfMagic during the Pro-Am, is right. The Hills Course is more rural because it is inland and doesn't have the views of the International Olympic Academy.

I played The Hills Course on November 26 and it was more gettable and better scores were on offer. There was an absence of wind that we experienced the previous day, but nonetheless, one felt more confident on day two.

Precision is still crucial off the tee and I enjoyed the variety of doglegs, reachable par-5s and fun par-3s. The par-3 12th hole, the longest on the Hills, has an elevated tee that gives you a long and panoramic view of the area.

Golfers of all levels are likely to enjoy The Hills more than the International Olympic Academy, but this doesn't take away from the challenge. I believe this course rewarded shot-making over power and big hitters don't necessarily have an advantage.

There are five tee boxes per hole, which is one less than the Olympic, and it stands at 6251 metres off the back tees. The back tees were an intimidating prospect on both courses and I didn't envy our professional playing partners as they took the long walk back on each hole.

I didn't manage to play The Bay Course. The Bay Course was the second signature course to open at Costa Navarino. It plays to a par of 70 and is
a little shorter than The Dunes Course at 5,422 metres from the back tees.

Situated a few minutes' drive away and offering an alternative set of challenges, the layout was designed by Robert Trent Jones Jr. and places a slightly greater emphasis on strategic play and positional golf.

Before both rounds of the Pro-Am, which was won by Jose Manuel Lara, we practised on the most picturesque and beautifully-placed driving range you could imagine.

On the first morning, you couldn't even see where your balls were flying as the sun was so bright. It wasn't the most ideal practice session, but the views of the nearby mountaintops made up for this.

After each round, we ate in the clubhouse at Navarino Hills. Once again, the staff were charming and extremely helpful. After driving our buggies back to the facility, employees were on hand to clean our clubs and unload the buggies.

I had a small taste of The Dunes Course on November 27 which is located onsite at the Westin Resort. The International Olympic Academy and Hills courses were about 20 minutes away from the resort in the car.

Having played just the front nine of The Dunes, I was still thoroughly impressed. The 2nd hole, a short par-4, went out to the sea and gave us a stunning view.

The 6th hole is arguably the best risk/reward par-4 I have ever played. It is a short hole directly downhill that is driveable from the tee. But the green is protected by bunkers and the putting surface itself is vast and slopey.

The greens on The Dunes Course were immaculate but so tough. The size of them meant you could have a number of different pin positions and we discovered firsthand how tricky each pin position could be.

The Dunes was opened in 2010 and designed by two-time Masters Champion and former Ryder Cup Captain Bernhard Langer in association with European Golf Design.

In November, Costa Navarino received one of its most prestigious accolades yet by being named best of the ‘Top 100 Resorts in Continental Europe’ by Golf World.

The destination isn't done yet. Mandarin Oriental Hotel Group and TEMES S.A., a leading developer and operator in high-end tourism and real estate, will introduce the first Mandarin Oriental property at Costa Navarino in spring 2023.

Mandarin Oriental will be located at Navarino Bay in the region of Messinia, southwest Peloponnese, amidst a breathtaking 140-hectare natural landscape, overlooking the Bay of Navarino.