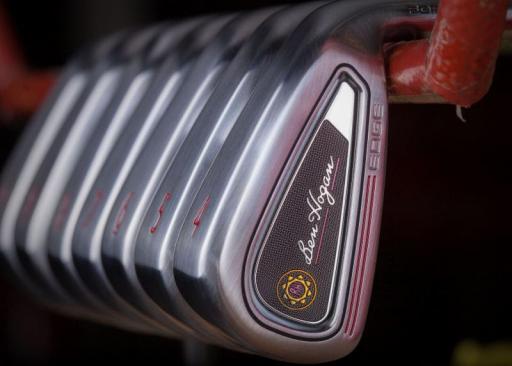 Ben Hogan Golf has revealed has re-launched a new line of Edge Irons, designed to provide a "nearly-impossible combination of Feel with Forgiveness".

The original Ben Hogan Edge Iron was introduced thirty years ago, and was known as the game’s preeminent ‘Game Enhancement’ iron. Golfers played the first Edge Iron because it looked and felt like a player’s iron but offered the same forgiveness and playability of a less attractive, investment cast, ‘Game Improvement’ iron.

Perimeter weighting has long been proven to be a significant club head technology. Engineers position weight around the edges or perimeter of the head which creates more stability and more forgiveness. It has been nearly impossible to incorporate into a single-piece forged iron. So, the Ben Hogan engineering team constructed the Ben Hogan Edge Iron using two separate forged parts.

The hosel and back frame are forged first, then the forged face is laser-welded into place. Although expensive and difficult to manufacture, this process allowed the design team to create perimeter weighting inside the club head.

The highly engineered, hollow head construction also allows the thickness of the club face to be varied. The longer irons with stronger lofts have a very thin, yet strong face for distance, even on shots struck on the toe or heel. The mid and short irons incorporate a progressively thicker face design which provides for a solid feel on scoring shots.

On average, the Ben Hogan Edge Irons are 12% larger than the tour-proven Ben Hogan PTx Irons. This creates a larger effective hitting area which means shots that are struck closer to the toe or heel, or high or low on the face will perform better.

The Ben Hogan Edge Irons are slightly offset. This provides more time for the hands to square up at impact. It also creates a steeper decent angle for higher shot trajectories that better hold the greens. A thicker top line creates an appearance of more mass in the club head which provides more confidence at address.

Enhanced V-Sole Technology benefits players of all skill levels. V-Sole Technology has long been a trademark of Ben Hogan irons and wedges. Ben Hogan Ft. Worth irons, PTx irons and others utilize the original Ben Hogan V-Sole Technology which combines a high bounce leading edge and low bounce trailing edge on the sole. This innovative technology minimizes ‘digging’ or ‘dragging’ to ensure solid impact, no matter the turf condition.

The enhanced V-Sole Technology featured on the Ben Hogan Edge Iron maintains the same design principles but has been redesigned for a wider variety of golfers. The leading edge from sole to face has been ‘softened’ and more bounce has been added to the trailing edge.

The PreciseLoft System has been simplified in the new Ben Hogan Edge irons. The Company remains committed to consistent four-degree loft gaps between each iron for optimal distance gapping and to minimize loft ‘compression’ at the short end of the set. However, Ben Hogan Edge irons will be available in only one launch profile (mid-high lofts) as preferred by the vast majority of Ben Hogan iron players.

As with all Ben Hogan irons, the Ben Hogan Edge Irons can be customized at no charge. Golfers can select specific lengths, lies, and grips (standard or mid-sized) as well as their choice of a variety of steel and graphite shafts.