Stenson makes the switch from FootJoy to ECCO GOLF shoes. 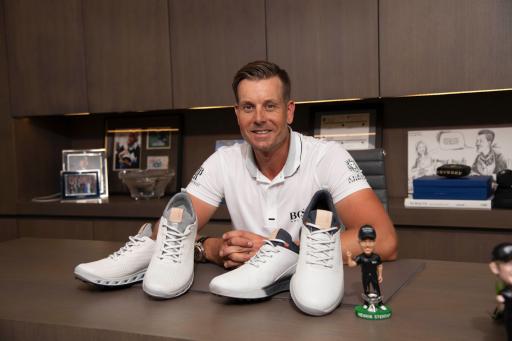 Stenson, 43, has penned a new multi-year deal with the pioneering shoe brand and will compete around the world wearing the company's famed hybrid shoes.

“They are a brand I have long admired due to their passion for innovation, quality and style. I can look back at my career to date with a lot of pride at the things that I have achieved, and I have no doubt that there are plenty more highlights to come wearing ECCO GOLF shoes.

“I have never worn hybrid shoes to compete before but as soon as I tried the ECCO models, I was amazed by both the comfort and traction they provided. I honestly can’t see myself wearing cleats again.”

The Swede has enjoyed a stellar career since turning pro in 1998 and became the first male Swedish major champion when he won the 2016 Open Championship at Royal Troon with a major championship record lowest aggregate score of 264.

A two-time European Tour Golfer of the Year (2013 and 2016) and Olympic silver medallist, Stenson has spent over 300 weeks ranked in the World Top Ten during an illustrious career which has seen him record more than 20 Tour victories.

In 2013, Stenson – nicknamed ‘The Iceman’ – won the PGA Tour's FedEx Cup and the European Tour's Race to Dubai, becoming the first player to win both, and to do so in the same outstanding season.

I’m delighted to announce that I’m joining the @ECCO_GOLF team. A brand with a true Scandinavian heritage, I look forward to a great partnership! #ECCOGOLF pic.twitter.com/zllZCVMdSF

Stenson has represented Europe five times at the Ryder Cup, including the 2018 staging at Le Golf National in Paris where he won each of his three matches to finish as one of only two players in the combined 24-man field to finish the event undefeated and untied.

Jesper Thuen, responsible for sponsorship at ECCO GOLF, commented: “It is no exaggeration to say that Henrik is one of the best and most well-respected golfers of our generation, so we are thrilled that he has signed with us.

“It is a real coup to have him representing the ECCO GOLF brand around the world and we look forward to seeing him add more titles to his already illustrious list of achievements.”

In addition to Stenson, ECCO GOLF shoes are worn in competition around the world by Lydia Ko, Minjee Lee, Caroline Masson, Fred Couples, Erik van Rooyen, Doc Redman and Thomas Bjørn, among others.