Erik van Rooyen who has been in excellent form on the European Tour has signed with Ecco Golf. 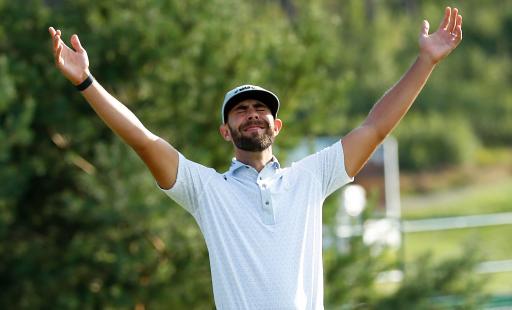 ECCO GOLF has announced the signing of South African star Erik van Rooyen as a brand ambassador following a successful season which has included his first European Tour victory, the Scandinavian Invitation.

The 29-year-old has penned a multi-year agreement with the shoe brand and will compete around the world wearing ECCO GOLF shoes while showcasing the ECCO GOLF logo on his collar.

Van Rooyen turned professional in 2013 and has amassed a string of impressive performances over the last two seasons since graduating to the European Tour in 2017, including his maiden victory in Sweden in August.

The South African has been competing in ECCO GOLF shoes for a large part of this season and earned his breakthrough triumph wearing the Danish brand’s pioneering STREET RETRO design.

THIS is the best driver of 2021....Or is it? Best Golf Driver 2021
DAZZLING SkyCaddie SX550 sets new benchmark for Golf GPS Devices

Earlier this year, van Rooyen recorded a top-10 finish at the USPGA Championship in just his second career major championship appearance, having finished in a tie for 17th at The Open Championship on his major debut in July 2018. He currently sits ninth on the European Tour’s Race to Dubai rankings.

“I’m delighted to be signing with a brand that has such an unrivalled reputation for its craftsmanship and quality,” said van Rooyen.

“They are the most comfortable golf shoes I’ve ever worn and I’m excited to be competing in them moving forward,” he added. “I’ve always been big on style so I’m very pleased to have teamed up with a brand that recognises the importance of style and performance going hand-in-hand.”

Jesper Thuen, responsible for sponsorship at ECCO GOLF, commented: “Erik is an outstanding talent and has showed his ability to compete with the very best. We’re extremely excited to have him representing the ECCO GOLF brand around the world.

“I have no doubt that Erik’s career is very much on the rise and that he is capable of achieving great things, as he demonstrated with his win at the Scandinavian Invitation. We look forward to seeing what’s to come in the future.”