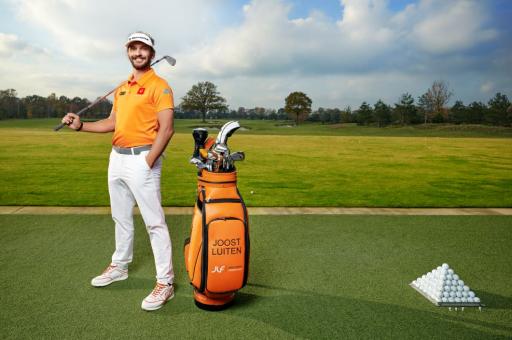 A six-time winner on the European Tour, Luiten is the first global Tour player to be signed by the fast-growing brand, which is now based in Amsterdam under the stewardship of former HI-TEC owner Frank van Wezel.

“The signing of Joost is a major statement by the Duca del Cosma brand and will give all our stockists a boost as they present this year’s exciting ranges to their customers,” said Frank. “Having one of the world’s top-ranked players wear our latest models will make a significant difference to the brand’s profile – not just in Holland and across Europe, but in all 30 countries where Duca del Cosma shoes are sold worldwide,” he added.

The first Dutch player to win his national Open title twice (2011 & 2013), Luiten will be playing in the latest waterproof soft spike shoes and sneaker-style spikeless models this coming season. All the premium shoes in the Duca del Cosma golf range are designed exclusively in Italy by Creative Director Baldovino Mattiazzo – creator of the first spikeless golf shoe in 2006 – and manufactured in Portugal.

“I’m very proud to be wearing attractive and comfortable Duca del Cosma shoes that are designed and made to such a high standard in Europe,” said Joost, who qualified for the European Tour’s season-ending DP World Tour Championship in Dubai.  “The brand’s connection with The Netherlands makes it even more special for me and I can’t wait to promote these distinctive shoes on Tour - both on and off the golf course,” he added.

The 34-year-old will be hoping for a hat-trick of KLM Open wins next September when competing at the Bernardus Golf course. The Duca del Cosma brand has been a high-profile sponsor of the KLM Open since 2018 and will once again provide footwear to hundreds of volunteers and officials at one of the most popular events on the European Tour.

In total, Luiten has eight tournament wins since turning professional at +5 in 2006 and won more than €12m in prize money. His victories have come in France, Austria, Malaysia, Wales and Oman, where he won his last title in 2018 at the inaugural NBO Oman Open. He represented The Netherlands at the 2016 Olympics and in three World Cup contests.

Details of the latest Duca del Cosma ranges can be found at www.ducadelcosma.com

NEXT PAGE: Has TaylorMade's Christmas Card made it clear Jon Rahm is off to Callaway?