Has TaylorMade's Christmas Card made it clear Jon Rahm is off to Callaway?

No sign of Jon Rahm on TaylorMade's Christmas Card, which intensifies Rahm to Callaway rumours... 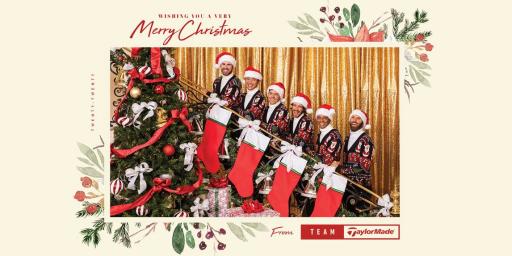 We love receiving a Christmas Card from TaylorMade at this time of year, only we couldn't help but notice one big omission from their big-name roster on its 2020 edition.

On last year's Christmas Card we had Tiger Woods, Rory McIlroy, Jason Day, Collin Morikawa, Matthew Wolff and Jon Rahm. This time around, there was no place for Rahm, or Day for that matter, but the addition of new signing Tommy Fleetwood.

While we have yet to hear any rumour about whether or not Day is heading out of TaylorMade, the big rumour doing the rounds this month is that Rahm is switching over to Callaway.

Several reports have also claimed recently that Rahm will be moving from adidas Golf to Callaway's apparel partner TravisMathew.

Nothing has been confirmed but you would like to think Rahm, who is World No.2 right now, would have made it onto TaylorMade's Christmas Card. Who knows, maybe he was just busy, but we think there is a little more to it than that.

Should Rahm end up joining Callaway in 2021, he would follow in the footsteps of his compatriot Sergio Garcia who did the same thing two years ago, only to last 12 months with the brand before terminating his contract to become a free agent.

Fleetwood had been a free agent in the equipment world since Nike Golf pulled out of the hardware market in 2016, but the Englishman this week signed a new deal with TaylorMade. We are still yet to learn the full details behind this deal and what clubs will be going into his bag ahead of 2021.

We will bring you more news when we have it available to us.