Hole19, Mobility Pro and HWPO in association with Callaway and adidas are giving one golfer the chance to claim a £100k investment for their debut year as a pro. 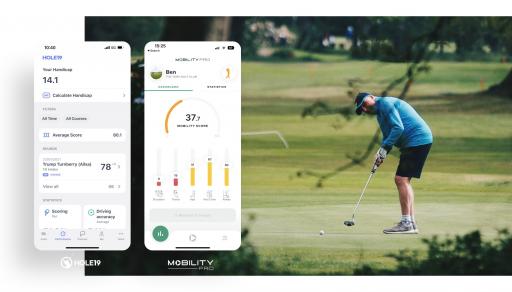 Hole19 is teaming up with Mobility Pro and HWPO in association with Callaway and adidas to offer one amateur golfer the chance to win a £100k investment for their debut year on tour.

The documentary-style competition, The Shot, will follow one golfer through a six-month tailored training programme of their body and mind, under the guidance of three-time PGA Tour winner Scott Stallings, in order to play their best golf and make the cut at Royal Liverpool Golf Club – where the investment awaits.

The Shot is also looking for three golfers of varying abilities who want to improve their golf game.

So whether you're teeing off at your club championship or simply looking to shave a few strokes off your handicap, The Shot is open to all.

Following a tailored improvement program devised by Mobility Pro, HWPO and Stallings, golfers will record their scores and stats via the Hole19 app to see how this translates to on-course performance.

The Shot is supported by Callaway who will be providing bespoke club and ball fittings to the chosen golfers to help with their games. Adidas and Hole19 Gear will be providing the best performance apparel to our golfers so they look sharp in front of the cameras.

Should they do so, Stallings will be on hand at Royal Liverpool to prepare them for the two biggest rounds of their lives.

If they make the cut after 36 holes, not only have they achieved a memory that will last a lifetime, but they would have secured £100,000 to support their first year as a professional golfer.

For our other golfers, they will compete in a showdown at a top course where there will be a cash prize (£750, the amateur limit) and a VIP experience to The Open.

"I'll help the players to be the best version of themselves. This is an opportunity of a lifetime, and I want them to do everything they can prior to that to perform on the first tee," said Stallings.

"We want The Shot to show that with the right support and products, we can hopefully make a golfer's dream come true by making it to The Open Championship, making the cut and having the financial investment they need to try and make it professionally."

Filming will begin in February 2023 and cameras will be following each golfer every month in the lead-up to Open Qualifying and The Match Showdown.

Entries are now open, so don't miss your Shot.