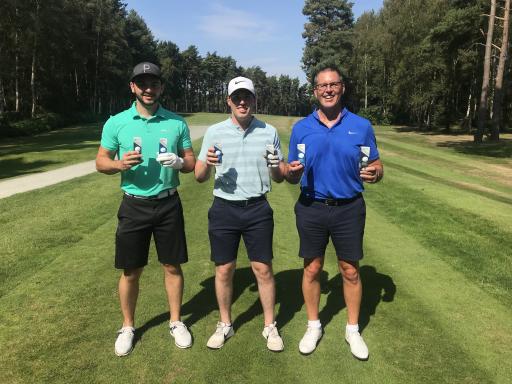 Earlier this year, TaylorMade launched its latest version of the TP5 and TP5x golf ball. Highlighted by its new High-Flex Material (HFM), TaylorMade claims it has taken the ’17 TP5 & TP5x to a new level of performance.

The key to achieving enhanced speed without impacting other areas of performance comes down to the ability to weave the new High-Flex Material (HFM) within TaylorMade’s proprietary 5-layer ball construction. In traditional golf balls with 3 or 4 layers, manufacturers are unable to utilise a soft core and maintain high ball velocities.

With the 2019 TP5 and TP5x, speed and spin are effectively decoupled—which enables an incredibly soft core to be “wrapped” by increasingly stiff materials, creating a Speed-Layer System with each outer layer getting progressively faster.
GolfMagic recently equipped three of our readers with both the new TP5 and TP5x balls to test out for themselves on the Longcross course at Foxhills Country Club.

Verdict: To be honest I've never used TaylorMade balls before. Since getting to a low enough handicap where I care about the balls I use, I've always gone with a Titleist Pro V1, mainly just because it's such a well known ball and it seemed to do the job when I was playing. But the new TaylorMade balls really surprised me. I'd heard they were good from quite a few people and the head professional at my club, but now I've played with them I completely understand why so many people are going with TaylorMade now.

Both balls gave me a lot of distance, I hit the ball pretty far off the tee as it is so I was amazed to see I was getting an extra five yards or so from my drives. The TP5 was my favourite for sure. I played the front nine with the TP5x and it was good, but switching to the TP5 on the back nine I really noticed the difference in my game. I hit the ball with a very high launch and the TP5 just seemed to give me a more controllable trajectory. The soft feel gave me a lot more confidence over my pitch shots too, it made me feel like I could be more aggressive and it was really paying off. Nine holes was enough time for me to know that I'll never be going back to Titleist, not now that I've experienced the TP5.

Verdict: I've always loved TaylorMade as a brand from a clubs point of view, I even upgraded my driver to the M5 earlier this year and I absolutely love it, but I've never really used their balls before. The Titleist Pro V1x has been my ball of choice for a number of years and I've always been reluctant to change as it's been a great ball for me. Safe to say after using the new TaylorMade TP5x, they'll be in my bag for my next competition. The first thing I noticed was the distance. I didn't really think that I would hit a ball further than I do the Pro V1x, but off the tee I was getting so much more distance than what I've been used to.

The TP5x was also giving me a higher launch with my irons which made my distance control the best I've seen it for a while. I land the ball pretty soft with my short irons, but even with a five iron, the TP5x was getting a really nice high launch and landing a lot softer on the green. The TP5 was impressive too, but it just didn't suit my game as well as the TP5x. I can't wait to start using these in competitions and seeing how many shots I can save.

Current ball: Whatever's in the bag

I'm not usually too fussed about which ball I use out on the course. As long as it's a decent brand and it's in okay condition then I'm happy to use it. TaylorMade, Callaway, Srixon, Titleist, as long as it's not like a Top Flite or Pinnacle, then I don't really mind. After using the new TaylorMade balls though, I've realised that I should be more selective when it comes to my golf ball. I'm a 15 handicapper so I can play to a decent level and using the new TaylorMade balls at Foxhills was probably the best I've played for a long time.

I really liked both the TP5 and the TP5x. I noticed my distance improve with my driver and my irons with both balls. I used the TP5 on the front nine and my short game was really good. You can really notice the soft feel of the ball compared to a lot of other balls I've used and that helped me with my chipping. The back nine I switched to the TP5x and straight away noticed the higher ball flight I was getting. For me personally, the main factor that I enjoyed the most with the new TaylorMade balls was the increase in distance. I'll definitely be investing into a few boxes of these!

For more information on the new TaylorMade TP5 and TP5x balls, visit: taylormade.co.uk