In this video, Alex from GolfMagic puts the NEW PING G425 irons up against the best selling irons of all time, the PING Eye 2 irons. 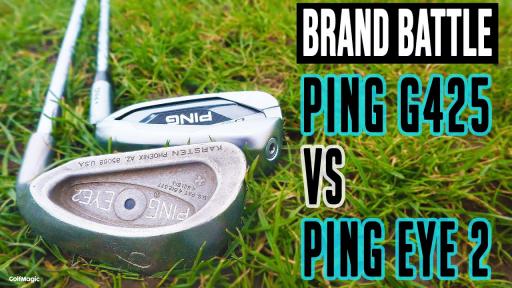 It's brand battle time again and in our most recent head-to-head video, it's old versus new as we put the PING G425 irons launched in 2021, up against a popular old favourite in the PING Eye 2 irons.

The PING G425 irons were announced earlier this year and they have been labelled by many, including us, as the ultimate game-improvement iron and the best in the category that PING has ever released.

These irons simply have everything, sleek aesthetics, distance, feel and a high-launch that have made the G425 irons possibly the best game-improvement iron of the year.

Although technology in irons has come a seriously long way, the PING Eye 2 irons were one of the most popular irons the brand has ever released, but given that they came out nearly 40 years ago in 1982, how do they compare performance wise against PING's latest irons?

The PING Eye 2 was an extremely popular choice of iron for many golfers for a very long time and it's interesting to see how the shape is fairly similar to the new G425 iron. With nearly 40 years between the two, can the Eye 2 iron still impress? Make sure you watch the video to find out! If you enjoyed the video, help us out my hitting that like button and comment which PING iron is your favourite of all time! Make sure you're subscribed to our YouTube channel so you can keep up to date with all of our content!