Made using original moulds, every new putter is ground by CEO John Solheim 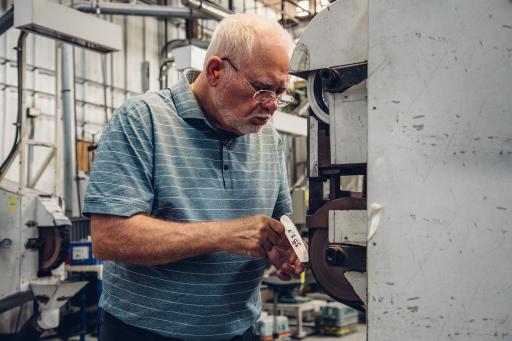 John Solheim gets back to work

The new product is made using original moulds, assembled with components in the US and supplied by retailers used in 1966.

Each bronze putter is hand ground by PING chairman and CEO John Solheim, like he did 50 years ago in the family garage.

“This has been a fun project and to be able to make it entirely in the United States is extra special,” said Solheim. “It brought back a lot of great memories from the days in our garage near Scottsdale. The Anser is the most successful putter design ever and its place in history is unquestioned.

“Who could have imagined 50 years after its invention it would still be the most dominant design on tour? It seems like golfers of all abilities have used an Anser putter at some point.

“This limited-edition version is a tribute to that success and a look to the future with some of the technology we’ve added in the form of tungsten in the heel and toe to bring it to modern-day weights.”

In a moment of inspiration, Karsten Solheim sketched the original design on a record sleeve, which went on to become the most successful putter in golf.

The new model is sand-cast using original tools, before the PING CEO gets to work grinding the sole of every putter.

“Most people don’t realise the amount of hand work that went into the original Anser putters 50 years ago,” added Solheim. “The radiuses on both of the hand-machined tools were finished with a file and sandpaper by Karsten.

"I built most of the original Ansers in the garage, starting with machining and grinding the raw castings and continuing on through final assembly. My brother Allan machined the second mould, which is slightly different and often referred to as the ‘slope-side’ mold. We wanted to bring that hand crafted approach back as part of the Anser’s 50-year celebration and its remarkable contribution to golf.”

There will be 1,550 right-handed putters made, and they will be distinguished by a “K” (Karsten’s mould) or “A” (Alan’s mould) in the serial number. Left-handed models are also available.

The name of the putter came about as it was the “answer”, but the “w” needed to be dropped in order to get the name on the back of the club.

Each putter comes in a presentation box with a leather putter cover and signed certificate from Solheim. They will be sold in PING stores worldwide.

Golf news
Ground-breaking study proves benefits of Darren Clarke CBD on golf performance
Golf news
Ping, Callaway or Titleist? What golf gear you buy says about YOUR personality
Equipment news
THIS is the best driver of 2021....Or is it? Best Golf Driver 2021
Equipment
The BEST wedges from American Golf for this Autumn
Equipment
The BEST Golf Jackets for Autumn/Winter from American Golf!