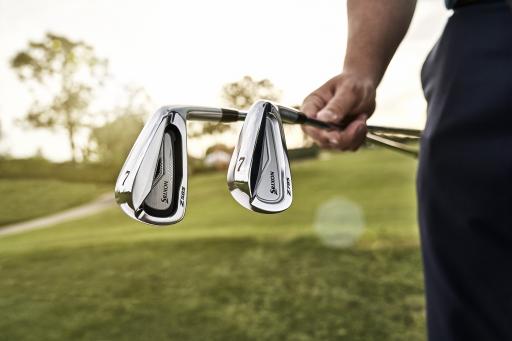 “The Z 785 and Z 585 irons are yet another step forward for Srixon as we continue to produce some of the highest-performing irons designed for better players,” said Jeff Brunski, Vice President of Research and Development.

The Z 785 irons feature a tour cavity, providing additional mass behind the impact location for increased shot-shaping ability and versatility.

Both irons offer an updated Tour V.T. Sole for smoother turf interaction and more consistent ball striking while the forged construction from the soft 1020 carbon steel provides a better feel through impact.

“Meanwhile, the Z 585s are similarly forged, featuring a high-strength steel face for more ball speed and now with an added speed groove for even more consistent distance control. Outstanding feel, control and distance from two lines which can be seamlessly blended together into a mixed set.”

Building on the most recent success of the Z U65 Utility iron, the new Z U85 Utility irons feature a hollow, forged construction for a high-launch trajectory, soft feel and unmatched distance. The utility irons offer an iron-like address profile making them perfect to create the ideal combo set with the Z 785 or Z 585 irons, depending on player preference.

“We already know that Srixon has one of the best forged irons on the market,” McDowell said. “The stats say that. Tour players choose it, even when they don’t have to. It sits great behind the ball and has that nice, soft buttery feel off the face.”

- Tour Cavity – Available solely in the Z 785 Irons, this extra mass behind your impact location allows for powerful shot shaping with increased versatility.

“When I’m putting the club behind the ball I have to be full of confidence and this club looks unbelievable,” said Russell Knox. “The new Srixon Z 785 iron is exactly how I want an iron to look. It’s very easy to hit and I know I’m going to hit a very good shot even before I hit it. The sweet spot’s massive.”