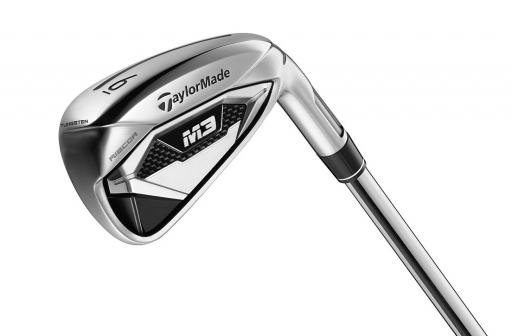 The irons, which replace the M1 and M2 irons, have a new internal support system to work with Face Slot Technology for increased ball speeds across the face for distance and better dispersion, while also increasing sound and feel.

By stiffening the structure of the iron RIBCOR reduces energy loss, particularly on miss-hit shots. This works in conjunction with Face Slots to stiffen the area outside the scorezone while retaining flexibility and COR in the centre of the club face.

The outer of the iron remains stiff, while the face remains flexible for increased ballspeeds.

RIBCOR also allows for mass distribution to the heel and toe areas, for higher MOI and more forgiveness.

Designed for maximum distance, forgiveness and feel. Pushing the boundaries of the COR limit, the M4 irons are made to offer maximum ball speeds to higher handicap golfers.

RIBCOR stiffens the body of the iron, while a multi-material dampening badge reduces vibrations for improved sound and feel compared to the M2 irons.

The 4-7 irons have Face Slots and Speed Pockets and a new redesigned off-centre Inverted Cone Technology.

There’s also a fluted hose, which saves weight, allowing for mass to be moved to the perimeters for higher MOI. TaylorMade say the M4 iron has 24% higher MOI compared to the M2.

Designed to offer distance and forgiveness in a more compact head shape.

RIBCOR is again implemented, while COR is again maxed out. The M3 iron also has a dampening badge like the M4 iron.

The M3 has 15 grams of tungsten in the sole, allowing TaylorMade to design a more compact head shape while also having a low CG and high MOI.

The 3-7 irons also have Face Slots and Speed Pockets and an Inverted Cone.

It has a 180 degree Fluted Hosel, a 36 degree Undercut and individually sized tungsten weights to locate head CG for precise launch and ballspeeds

The M3 has a thinner topline compared to the M1, and a straighter leading edge. They are also designed to offer improved bounce, for better turf interaction.