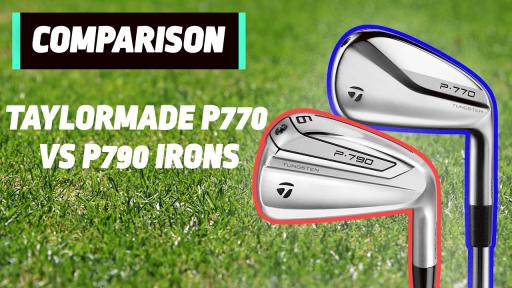 The TaylorMade P790 is one of the most popular irons to ever hit the golf industry and when a new model was brought out in 2019, everyone was stunned with how the slight design changes had made the club look even more elegant. The P790 now has a sibling rival in the brand new TaylorMade P770 announced earlier this month, with similar performance benefits of the P790, but in a smaller, more compact profile.

The arrival of the P770 doesn't mean the P790 is now in the past, as its versatility makes it one of the most appealing irons available to a wide range of golfers, but for lower handicap players looking for distance and forgiveness but in more of a players' profile, the P770 is the perfect option.

After being wowed by the TaylorMade P770 when we first took them to the driving range, we decided to put it up against the P790 to help our viewers understand the benefits of both irons and which one they may be better suited to.

Watch the video below as GolfMagic's Alex Lodge puts both the irons to the test at Knole Park Golf Club and feel free to let us know in the comments on our YouTube channel which iron you prefer.

As I’m sure you’ve already seen, the P770 irons are absolutely stunning. It’s very clear on first glance that these irons are in the generation of the P790’s. The back of the club's modern, sleek finish is really pleasing to the eye. The slight muscleback element added sets it apart from it’s sibling here and gives it a more professional feel.

We at GolfMagic expected this type of elegant, minimalistic design for this new addition to the P700 series range. The top line is thinner than the P790 but not that of a bladed iron so there clearly is some forgiveness here.

In terms of what looks better between the P770 and the P790? Hard to say. They are both quite similar, and it is a really personal preference decision here, but with the P770 being more compact and with a thinner top line, we're going to have to side with the P770.

The P790 features a thin face designed to produce a faster COR and for the first time includes Progressive Inverted Cone Technology (PICT) designed to improve accuracy throughout the set, minimising the right tendency often found in the long irons. The thinner face also maintains sound and feel but enhances feedback regardless of where the ball is struck on the face.

Inside the P790 is a large tungsten weighting system that delivers a deep centre of gravity and a higher launch angle.

The new P770 iron was forged from the same DNA as the P790, relying on advanced materials and innovative technologies to push the boundaries of distance, feel and performance. Delivering it all in a compact players iron shape.

In comparison to its sibling, the P770 has a thinner top line, narrower sole and shorter blade length. The smaller construction helps inspire confidence at address, while also promoting enhanced workability and control.

Also, within the face is Progressive Inverted Cone Technology, which is now uniquely positioned in each P770 iron to both increase the sweet spot and minimise the effects of common mis-hits.

ICT is positioned in the centre of the face on mid irons and more towards the toe on long irons to deliver performance exactly where golfers need it the most. SpeedFoam™ debuted in the original P•790 irons and continues to play a pivotal role in the performance of P770.

The company’s patented Thru-Slot Speed Pocket™ (3-7 iron) features in both the P790 and the P770 and is engineered for increased ball speed and distance while protecting performance on shots hit low on the face.

Now with the P770, from address they looked great. A bit thicker of a top line compared to the MB irons but nothing too drastic. You can tell it was a player iron by the blade length. With the P770's we found that when you hit them out the middle they felt extremely pure, but a considerable amount of distance was being lost with off-centre strikes. Of course these are players irons so that is to be expected to some degree, but the P790 iron is known for offering excellent distance and a minimal loss on mishits.

The P790's are popular for a reason. Not only do they offer lots of distance, but they are extremely forgiving for a players iron, hence why they are so appealing to such a vast range of handicaps.

Although slightly bigger than the P770 in terms of head size, the P790's definitely do not look too chunky at address, unless you're a very low-handicap player who is used to looking down at blades.

The performance of the two irons are very similarin terms of distance and spin rates, but the P790 offer more forgiveness than the P770. Better players are more likely to lean towards the P770's due to the smaller profile, but if you're interested in these irons, then we strongly suggest you give them both a try before making a decision.

For more details on the head to head comparison of the TaylorMade P770 and P790 irons, make sure you watch the video attached to this article.

NEXT PAGE: Everything you need to know about the new TaylorMade P7MB, P7MC and P770 irons