Alex from GolfMagic tests two putters from TaylorMade and Odyssey, to see which he would recommend to you. 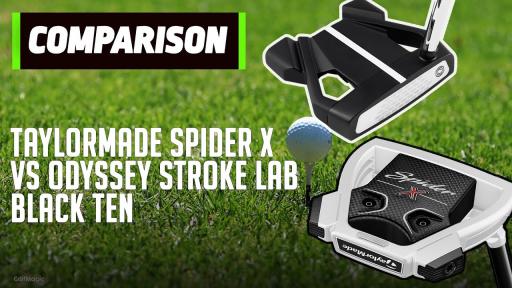 The TaylorMade Spider X and Odyssey Stroke Lab Black Ten are two of the most impressive putters to hit the market recently, but which one is right for you?

Watch the video below as GolfMagic's Alex Lodge puts both putters to the test and explains which type of golfer they best suit.

In the words of Alex Lodge

Putters are a little bit different to analyse as we have now launch monitors or computer statistics to determine what’s actually better, but I can give you my opinion for each. My putting is certainly the worst part of my game. I play left hand over low and usually have around 32/33 putts a round and struggle with the pace of the greens.

With this testing I started with 20 ft putts, then 50ft, and finish with 6ft. For the Odyssey, I definitely felt the most confident from the mid range. I was pleasantly surprised by how it looked over the ball and definitely felt confident. The weighting is a bit different – you can tell the balance is different to previous putters so that took some getting used to. My performance wasn’t great but mentally I felt good over them.

Longer putts for me was where it got really interesting. The putt I chose was by no means a slow putt – it was fast and down a pretty  significant slope so I didn’t have to put that much power into it, but I still had to increase the arc length of my stroke. I felt myself lose a bit of control with the putter head here, and on some putts I didn’t really know where the middle of the clubface was – which for a putt is pretty embarrassing.

This lead to some pretty inconsistent results and although I eventually got the pace of it correct, there were a lot of putts that were in a 10ft circle which is certainly not what you want to be having for your second putt.

Short range putts is something I really struggle with - it’s more of a mental thing where I get in my head and second guess every aspect of the putt, but with that, you need a putter that will settle your mind and try and help you focus on making the stroke. I felt like the Odyssey did a great job with this. It’s large structure almost overpowers the hole and I didn’t feel any ambiguity here from the weighting. It’s also worth noting that the colour scheme has no glare so again it’s all positives from me from this distance, and certainly a strong point for this putter.

Now the Taylormade Spider X putter has several colours, navy, brown and the new chalk, which is the one I tested. The Spider generation has a vast history, in fact, it’s over 10 years old now, with the first being much larger and clunkier, almost built like a fridge. Since it’s first release in 2008, it’s become a global phenomen on tour and for amateurs, and with this design, its easy to see why. The Spider X is smaller than the previous models and they have reintrouduced the sight line that hasn’t been present in other, older models, such as Jason Days.

Going into the specifics, the new models have been improved in every aspect. The head is 5% smaller for a much more aesthetic look, while a carbon core (which weighs 15g, instead of 79g in the old model) frees up weight to increase the heads stability frame from 247g to 320g.

Mid-range putts, I honestly don’t think any putter can beat the Spider X. The chalk design is superb, and this putter has been used for a good few months now and there has been no wear on the colour if you’re concerned abut that. The weighting feels extremely balanced and the Superstroke grip is a great added touch. For me, I always felt square when hitting a put from this range, and that as long as I lined up correctly, I’d have a chance of holing one.

Longer putts was where this putter came out tops by a long way. It’s worth mentioning the insert here feels very soft and far better than the previous models. I had a Spider a few years back and I got rid of it after three rounds because of how much I hated the insert, but TaylorMade have come up trumps here as it feels quite soft and very responsive for off-centre strikes which is exactly what amateurs need. The arc length issue I had with the Odyssey wasn’t present here, as you can see by my results!

For short putts this is another big positive for the Spider X in comparison to their previous models, due to two things. The new alignment design is really helpful and especially for the chalk colour, it looks very professional. The smaller head, although still large, has a similar
feel to the odssey in that it overpowers the whole and makes you feel very confident at address.

Make sure you watch the video to see the full putter head to head and find out who Alex recommends each putter to.