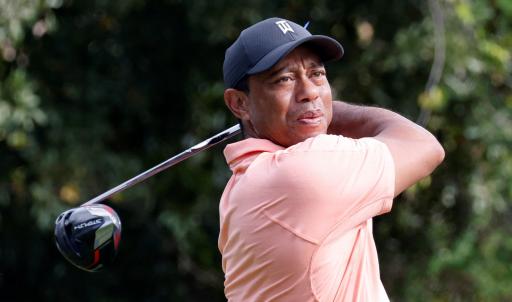 Tiger Woods has labelled his new TaylorMade Stealth Plus Driver as "truly an amazing product" on the day when his equipment supplier launched the first ever carbonwood to the game of golf.

Woods, who turned 46 last week, was spotted using the brand new Stealth Plus driver in 9 degrees en route to finishing second with his 12-year-old son Charlie Woods at the PNC Championship three weeks ago.

TaylorMade has made a bold claim with its latest product release, saying more than 20 years' worth of research has gone into the new era of driver technology in their carbon Twist Face drivers.

One of the features of Stealth carbonwoods is the red face. It has 60 layers of carbon fibre to help provide more speed.

TaylorMade say their engineers made a 26g face, which is 40% lighter than a titanium face of the same size.

With this, the company say the weight savings and larger face made possible by the twist face deliver stunning new ball speeds compared to the previous models.

There are three new Stealth drivers in the lineup for 2022: Stealth Plus, as used by Tiger Woods, Stealth, and Stealth HD.

Woods took to his Instagram page to let his 2.8 million followers know that he was in fact using the Stealth Plus driver in competition at the PNC Championship.

The new Stealth Plus driver isn't the only new product in the bag for Woods, who has also added a prototype Bridgestone Tour B XS ball.

When we get to see Woods play in competition is up for debate, but he has earmarked playing at the 150th Open at St Andrews.

Woods was most recently pictured wearing a Straight Outta Ice Bath hoodie in LA before he signed a few autographs.

REVEALED: WHAT'S IN THE BAG OF TIGER WOODS IN 2022

The former World  No.1 wasn't the only big-name PGA Tour player to speak up the new Stealth drivers with Dustin Johnson, Sergio Garcia, Tommy Fleetwood and Robert MacIntyre also getting involved on their social media pages.

Dustin Johnson posted two images of him with the Stealth drivers in hand and he captioned the post: "Excited to put the new Stealth Driver Carbonwood in play this year. Look out Mike Trout and Wayne Gretzky, something cool is coming your way soon!"

Wayne is the father of Paulina Gretzky, who is Dustin Johnson's fiancee.

It has not yet been determined as to which of the Stealth drivers Johnson will put in play on the PGA Tour in 2022, but if history is anything to go by then he is likely going to chop and change as the season progresses.

Johnson had been mixing between the original SIM driver and the SIM2 Max driver last year.

NEXT PAGE: DUSTIN AND PAULINA PARTY HARD TO RING IN THE NEW YEAR