Paulina Gretzky and Dustin Johnson fire out confetti as they welcome 2022 with their friends. 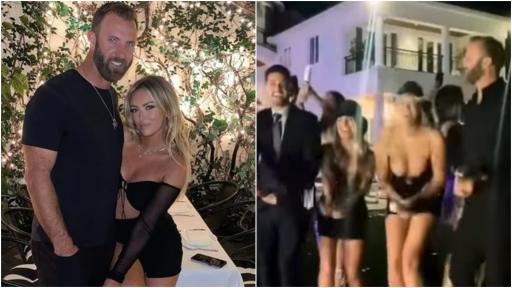 Dustin Johnson and his fiancee Paulina Gretzky took to social media to reveal their epic New Year celebrations with friends.

Gretzky, who recently celebrated her 33rd birthday, was rocking a mini black cut-out dress with stilettos as former World No.1 Johnson opted for a smart black suit.

Johnson and Gretzky, who have been engaged since 2013, were spotted firing out confetti to ring in the New Year.

WATCH THE VIDEO BELOW TO SEE THEIR NEW YEAR CELEBRATIONS

Gretzky recently revealed on her Instagram story that they will get married at Blackberry Farm, a five-star resort in Walland, Tennessee, which has an attractive brewery and other great features.

It still remains something of an unknown as to when Johnson and Gretzky will tie the knot but it's understood to be very soon.

Gretzky and Johnson supposedly ran up a restaurant tab of $25,000 at her recent birthday celebrations, according to multiple reports.

RELATED: PAULINA GRETZKY OPENS UP ON HER STRUGGLE WITH BLINDNESS

RELATED: PAULINA SAYS THAT DUSTIN TOLD HER NOT TO DO PLAYBOY

The pair have grown in popularity over the years and they have grown a diverse fanbase of golf fans, as well as those who are fans of Gretzky's modelling and artistic work.

Wayne played 20 seasons in the National Hockey League for four teams from 1979 to 1999.

Johnson, who entered the record books when going 5-0 at the Ryder Cup last year, is not competing in the first PGA Tour event of 2021 at the Sentry Tournament of Champions but he is expected to make his return to golf over the coming weeks.

Gretzky and Johnson's combined net worth is said to be in the region of $55 million.

NEXT PAGE: JOHN DALY FIRES SHOTS AT BRYSON DECHAMBEAU OVER HIS DRIVING DISTANCE ON PGA TOUR