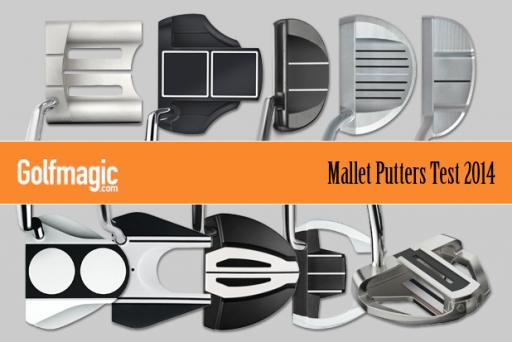 Summary: Ghost Spider Si is a high MOI counterbalanced putter that is one of the most consistent and forgiving putters the company has introduced. The large 380g head coupled with a 15-inch, 130g counterbalanced grip helps promote exceptional stability, control and feel. While the typical putter has one light end (grip) and one heavy end (head), putting more weight in the grip to counterbalance the weight of the head increases the MOI of the entire club, from top to bottom, which makes it 50% more stable and much easier to keep the head on path - something the company calls "Stroke Stability." Ghost Spider Si has an MOI of more than 6000 which makes the putter head more resistant to twisting at impact and helps protect ball speed and distance-control on off-centre hits.

Looks: Aesthically, Spider Si is a simple yet innovative design. Head profile split opinion but seven of the 12 gave their seal of approval. Spider Si has evolved a little more from the Daddy Long Legs of 2013 but the white head once again contrasts beautifully with the green to promote additional alignment benefits. Majority of testers felt the "spider legs" help get the face of the putter square at address. Testers also favoured the black portion of the putter with the three alignment lines in the sense it helped make sure the putter head is straight down the intended line. 3.9 (out of 5)

Feel: One of the best feeling mallets in the test. PureRoll Surlyn insert promotes a soft-yet-solid feel and a very smooth roll off the face. Nine testers enjoyed the counterbalance on offer and said they experienced a heavy head that aided a stable stroke. Three testers, however, said they experienced a light putter head that was tricky to control in the wind. Testers also liked the extended grip, explaining it was nice to grip a putter wherever they wanted to in order to feel comfortable over the ball. 7.9 (out of 10)

Performance: Very forgiving putter that is almost impossible to miss from close range. Distance control also very strong on the 15-foot putts. Several testers felt it was a bit of a rattlesnake in the hands out in the wind, but on the whole, testers experienced plenty of holed putts, particularly from the 3- and 6-foot circle. 7.7 (out of 10)

Verdict: Very stable putter and perfect if you're struggling to bury those shorties. Counterbalance system instils confidence and a lack of twisting at impact on the must-make putts as well as decent distance control on the long putts. Great value for money at £130. 19.5 (out of 25)