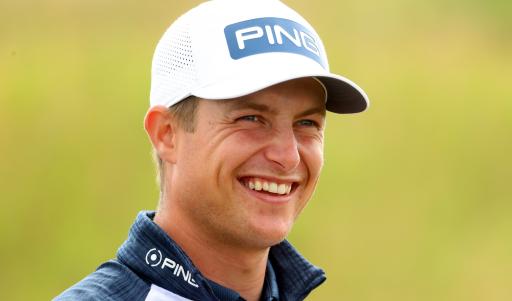 Calum Hill raced out the blocks to lead on day one of the Hero Open with a stunning course-record 9-under 63 on the Torrance Course at Fairmont St Andrews.

Hill, 26, posted a flawless round of nine birdies and 10 pars to move one shot ahead of Northern Ireland's Jonathan Caldwell, who fired an equally impressive 64 as he goes in search of a second European Tour win in the space of six events.

A course record and career best round on the European Tour #HeroOpen pic.twitter.com/AFpJZG4oE6

Searching for a maiden European Tour victory, Hill is one of 17 players in the field bidding to become the first Scottish winner on home soil since Paul Lawrie in 2012.

"I putted well," said Hill after his round. "I didn’t put it in places that caused me too much bother – I did make my fair share of putts. One really good 15-footer on number one to save par and a lot of mid-range putts for birdies.

"We got the best part of (the weather) 100 per cent. Our front nine was relatively calm, probably half a club wind, then back nine picked up. We got three quarters of our day in quite pleasant conditions, I think it’s just getting worse from here – we took advantage.

"I really enjoy it (playing at home). There’s a lot of family and friends who can come and watch, I always enjoy playing in front of people I know. It makes it good fun."

Ross Fisher carded a resurgent round of 65 to lie 7-under par alongside Robin Sciot-Siegrist and Chase Hanna, while Chris Paisley, Alvaro Quiros and Nicolai von Dellingshausen are a further shot back on 6-under par.

Adrian Otaegui, who won the Scottish Championship when it was hosted on the Torrance Course last year, got off to a solid start with a round of 5-under par.