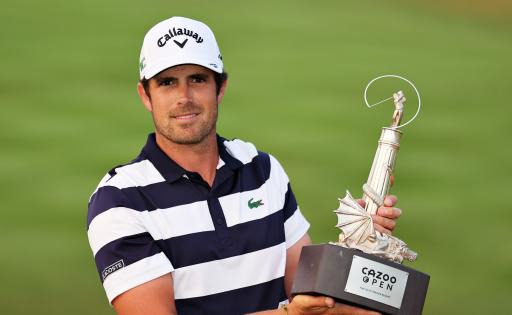 Nacho Elvira defeated Justin Harding in a play-off at The Celtic Manor Resort to win his first European Tour title at the Cazoo Open supported by Gareth Bale.

The Spaniard took a six-stroke lead into the final day on The Twenty Ten Course, but was caught by the chasing pack as Callum Shinkwin, Mikko Korhonen and Harding staked their claims for the title.

Of those giving chase, Harding rose to the top as he signed for a bogey-free six under par 65 to set the clubhouse target at 16 under par.

Elvira, who sat on 17 under par and was one under for the day when stood on the 18th tee, found the 72nd green with his third stroke after laying up on the par five closing hole.

The 34-year-old had two putts for victory but missed a three-footer coming back after sliding his first past the hole, facing a play-off after tapping in for bogey.

On the first extra hole, both found the green in three but, after Elvira missed a birdie chance to win from nine feet, Harding missed his attempt at matching the Spaniard's par to hand Elvira his first title on his 195th European Tour start.

"It was tougher than I thought, it’s golf and you have to play 72 holes," said Elvira.

"I was playing with Callum [Shinkwin], he was playing great – he was hitting at every pin and trying to catch some ground. I had a little bit of a shaky start and woke up on number six, then started playing some solid golf. I missed a couple of shots. I was trying to be not too aggressive.

"I think the putter wasn’t as sharp today as it was the last two days, you could see that on 18, obviously. After six I was pretty relaxed until 18, the last three putts were tough. I don’t think I’ve ever been nervous, and I’m not ashamed to admit I was quite nervous.

"I was more relaxed in the play-off than I was in regulation. I hit a good drive, just a little bit left, and I didn’t catch a good lie – on the rough. I had good distance to go for it, but the lie wasn’t good enough. I saw Justin laid up, so decided to get a good yardage and try to hit a great shot – that’s what I did. After that I hit a great putt, just a little bit short.

"(Seve Ballesteros and José María Olazábal) will probably have their heads in the ground after that last putt on 18. I hope they’re proud. I hope Seve, wherever he is is proud, and I hope José María is proud as well. To be honest, I was thinking, especially on the last nine or ten holes about Celia Barquín (Arozamena), she passed away a few years ago and I was good friends with the family. This is for her.”