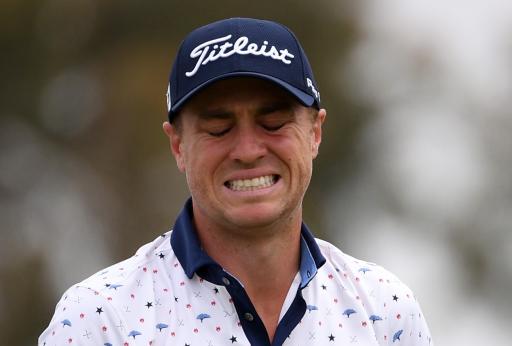 Justin Thomas was seen hitting one of the worst shots of his entire professional career on day three at the Scottish Open when topping a wood from the fairway on the par-5 10th at The Renaissance Club.

The American waited for the green to clear from outside of 240 yards, but then proceeded to top his fairway wood into the bunker in front of him as he let go of the club on his follow through.

Thomas ended up making bogey on the hole en route to a round of 1-under 70 to lie five shots off the pace on 9-under par with one round to go.

Check out what a number of golf fans are saying on social media:

"The most relatable shot I've seen all week."

"JT hits so many average shots for a top player."

"Welcome to my world JT."

"I can do that every single round."

"Needs to stop throwing his clubs around, does it so many times."

"That's what he gets for chirping Rickie."

"Always find it a bit dramatic to release the club like this after a bad shot... curse aloud at yourself but it's as if they are trying to blame some malfunction for their poor swing."

"Someone should tell him to keep his head down."

"It's so much better when you see where the ball went."

Thomas Detry and Matt Fitzpatrick share the 54-hole lead on 14-under par, one shot ahead of tournament favourite Jon Rahm.