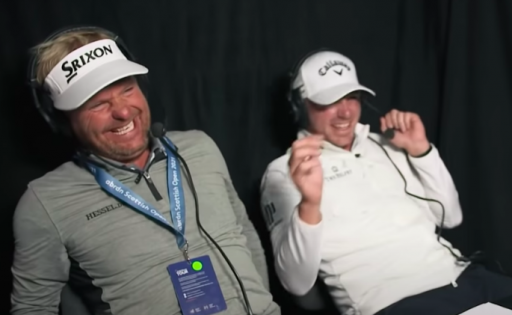 The European Tour are fantastic at presenting entertaining content on their social media channels and they are back with the Fake Pundit Prank at the Scottish Open.

With European Tour players Matt Wallace and Soren Kjeldsen in a booth and behind the microphone, they directed Seán Burke who acted as a live presenter on Sky Sports Golf.

Seán played a fantastic role as the blundering pundit who constantly got things wrong and put the players that he interviewed on the spot on numerous occasions.

Seán had an earpiece in and he had to do what Wallace and Kjeldsen told him to do, such as saying that the former PGA champion Collin Morikawa had won two majors instead of one.

Also, the fake pundit said to 2021 European Ryder Cup captain Padraig Harrington that he had been denied an autograph from the three-time major winner in 2005.

Seán was told to make each situation as awkward as possible, and it is fair to say that he did a fine job in doing so.

Seán also spoke to Lee Westwood at the Renaissance Club and as he brought up some of the Englishman's statistics on the screen, a very old picture of Westwood was used on the graphic.

Another highlight of the video was with reigning Scottish Open champion Aaron Rai, who was left baffled when Seán was using fabricated golf terminology such as "Quantitative Torque."

Seán did a fine job and so did Wallace and Kjeldsen, who orchestrated the whole event.