Kristoffer Broberg opens up COMMANDING LEAD at the Dutch Open 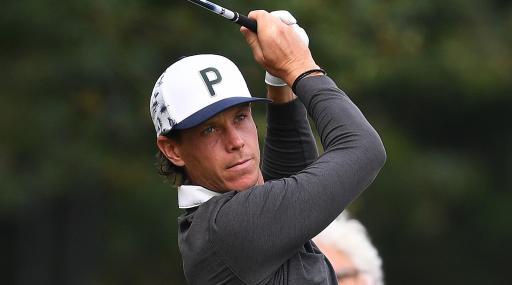 Sweden's Kristoffer Broberg opened up a commanding eight-shot lead on day three of the Dutch Open after firing a course-record 11-under 61 at Bernardus Golf Club.

Broberg, who also carded a 64 on Friday, now finds himself out clear in front on 23-under par and eight shots clear of Denmark's Marcus Helligkilde, who posted a 68.

Broberg's 54-hole total of 23-under par is the joint lowest for 54 holes in European Tour history, joining Ernie Els and David Howell in the record books.

The 35-year-old raced out the blocks on Saturday by playing his first six holes in 6-under par, highlighted by a superb eagle-three at the par-5 4th.

He would bogey the par-4 9th to go out in 31 shots but then responded superbly on the back nine with six birdies in the space of seven holes from the 11th to race clear of the chasing pack.

In need of an eagle up the last to become just the second ever player to shoot 59 on the European Tour, the Swede unfortunately found the bunker off the tee and was forced to lay up. He then left his wedge shot short of the pin some 30 feet and he would two-putt for par for a 61.

Broberg first announced himself to the golfing world in 2012 as he won three events in four weeks on the European Challenge Tour, and within three years he was a European Tour winner at the BMW Masters.

He lost his card in 2017 and, while he regained it at the Qualifying School, hip and knee injuries contributed to him playing just 11 events between 2018 and 2020.

The four time Challenge Tour winner missed six of his first eight cuts this season but, with his fitness returning, he has made four of his last five and could create one of the stories of the 2021 Race to Dubai over the weekend.

Wow! Six under through six holes

Broberg's 30ft putt moves him five clear and to 18 under par.#DutchOpen2021 pic.twitter.com/QpGuRp7fwP

Spain's Alejandro Canizares similarly caught fire on the back nine with six consecutive birdies from the 12th but he would bogey the par-5 18th to fall back to 14-under par in a tie for third with England's Richard Mansell and Germany's Matthias Schmid.

Czech Republic's little-known Ondrej Lieser finds himself just inside the top 20, but he had a moment to forget on the par-4 10th when he unleashed a shocking F-bomb off the tee:

Love how Mark Roe was buzzing for us all to see Ondrej Lieser.

Then he did this pic.twitter.com/FnS91XPR2e

NEXT PAGE: JON RAHM MISSES THE CUT ON THE PGA TOUR JUST A WEEK BEFORE THE RYDER CUP

Golf news
Paul Casey's wife gave him a STEAMY Ryder Cup gift and this is how fans reacted
European Tour
Jon Rahm dreadful at Andalucia Masters, then PROVES why he is still the best
European Tour
World No. 1 Jon Rahm endures HORROR START on day one of Andalucia Masters
Golf news
'You are not Tiger Woods': 5 of the most ANNOYING things to avoid playing golf
Tips and Instruction
Best Golf Tips: How to hit a flop-shot Phil Mickelson style!