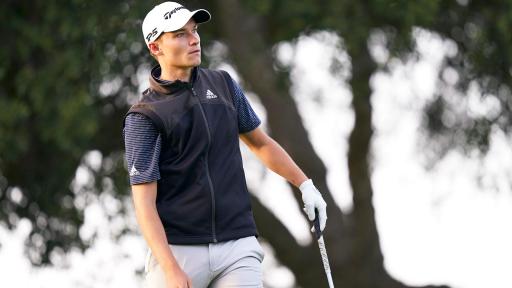 Since finishing fifth at last year's Q-School Final at Lumine (host venue the past three times), Hojgaard's game has gone from strength to strength, highlighted by two victories this season at the AfrAsia Bank Mauritius Open in December and then most recently at the ISPS Handa UK Championship at The Belfry.

As a result of his latest victory at the four-time Ryder Cup venue, Hojgaard became the second youngest player to achieve multiple wins on the European Tour after Matteo Manassero.

Hojgaard has now vaulted to a current 69th in the Official World Golf Rankings from seemingly out of nowhere. Only the immediate goal is much bigger, as the Dane discussed in an exclusive interview with Performance 54 that has been shared with us here at GolfMagic.

Rasmus, having missed out on automatic European Tour qualification from the Challenge Tour, how did the 252-hole examination during Q-School compare to some of those early professional events?

I felt I was playing really good golf leading up to Q-School, and I wasn't concerned about playing another year on the Challenge Tour, so I didn't feel like I had much pressure heading into the event.

I wouldn't say I feared any of the events I played early on in my career. I always looked at all these events as opportunities to learn, and I felt very comfortable and confident that I could get my European Tour card at Lumine.

You were 4-over par after your opening 9 holes at the Q-School Final at Lumine. How did you find the motivation and determination to fight through that difficult start, and to then record the second best scores on the final two days en route to finishing fifth for the week?

I was actually playing pretty solid, but it was just one hole that cost me five shots! With the cut being after four rounds, I knew I had plenty of time to recover though. I didn't need to panic. I just needed to make sure I didn't do anything silly over the final nine holes that opening round to leave myself with too much work to do.

What were your favourite holes at Lumine, and which of the two courses - The Hills and The Lakes - did you prefer?

I would say I preferrred The Hills Course. Funnily enough, the 8th hole is a great par-3... you have to hit a proper golf shot there, and if you don't you can easily run up a big number just like I did!

You birdied the 18th hole four times out of six during the week at Lumine. How important is it to finish with good shots to end a round of golf?

It's always nice to finish off well. With a par-5 that is easily reachable in two shots, the goal is to make birdie. I felt confident on the 18th at both courses.

Buzzing Thanks for all the messages! #UKChampionship

How important was the Q-School Final at Lumine in your pathway to becoming a double champion so quickly on the European Tour this season? Is the test a good preparation for the Tour events that you have played in so far?

I feel it was very important. The biggest thing was that it taught me to stay patient and that I had the resilience to build a score and handle a lot of pressure, both physically and mentally during an extremely tiring week.

You are now a two-time European Tour winner at just 19 years old, and lots of people in the golf industry are extremely excited about your future. What are your short-term goals?

They are just to keep improving, keep learning and tightening up the areas of my game that I can see need to be stronger to compete at the top level. My short-term goal is to break into the world's top 50, and then to play all of the majors and the WGC tournaments.

You have also enjoyed an impressive amateur career having played in Junior Ryder Cups, World Cups and the Eisenhower Trophy. Which one was the most exciting?

That's a tough question because I enjoyed them all to be honest. The Eisenhower was great to win an event alongside my brother Nicolai, and also John Axelsen. We beat a strong field there, so that's always nice. The Junior Ryder Cup was very cool as we got to be around the main event too, which again motivates you to want to be on many Ryder Cup teams in the future.