The odds of a tour player getting an ace are one in 2500, so can Rory McIlroy and Justin Thomas do it with 50 attempts each? 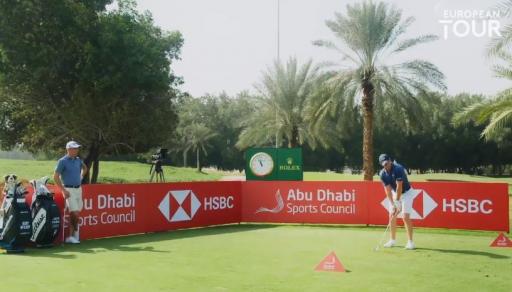 The long awaited video of Rory McIlroy and Justin Thomas attempting the Chase The Ace 50/50 challenge finally dropped on social media last night, with both the PGA Tour and the European Tour promoting the video.

The challenge has become a popular piece of content for the European Tour, but never before have two stars as big as McIlroy and Thomas taken part, making this the most highly anticipated hole-in-one challenge to date.

"So how many hole-in-one's have you had?" McIlroy says to Thomas as they walk to the tee.

"I don't know. I just have been making so many that I'm kind of losing count," jokes Thomas in response.

WATCH MCILROY AND THOMAS CHASE THE ACE BELOW:

The video was filmed at Abu Dhabu Golf Club during the week of the Abu Dhabi HSBC Championship, where Tyrrell Hatton went on to win and leapfrog his future Ryder Cup teammate McIlroy in the world rankings.

McIlroy made his first start of 2021 in Abu Dhabi and played in his first event since The Masters back in November. The Northern Irishman looked extremely impressive throughout, but lacked the intensity required in the final round when paired in the last group alongside Hatton.

Thomas' week in Abu Dhabi was less impressive after failing to make the cut, although he seemed to come the closest during the Chase The Ace Challenge, hitting a number of balls just a few inches away from the hole.

After hearing the news that his good friend Tiger Woods had been in a car accident on Tuesday, Thomas spoke to the media ahead of this week's WGC Workday Championship.

"I'm sick to my stomach. It hurts to see one of your closest friends get into an accident. I just hope he's alright."