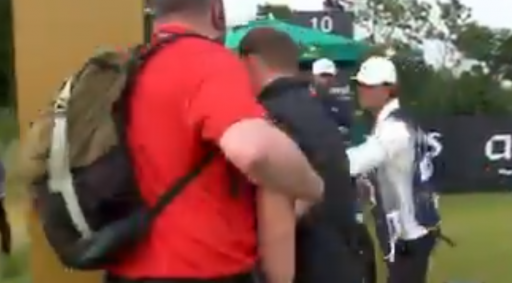 Rory McIlroy admitted he was shocked a golf fan took out one of his clubs and his driver headcover prior to teeing off his second round at the Scottish Open, but revealed the situation was eventually "handled well."

McIlroy was getting ready to tee off on the 10th tee, his first hole of day two, alongside playing partners Jon Rahm and Justin Thomas.

As the Northern Irishman was weighing up how best to play the hole with his caddie Harry Diamond, a golf fan strolled onto the tee box and took out one of McIlroy's irons along with his driver headcover, before walking to the other side of the tee box.

Rahm's caddie then called for security and the man was quickly walked out of the premises, much to the bemusement of everyone watching on. As you can see from the video below, the man was not too keen to hand back the headcover.

"You all saw it on TV," said McIlroy, responding to the incident after signing for a disappointing level-par 71.

"So you know what happened. I was surprised. But it was handled efficiently, and everything was OK.

"I had no idea who it was. Yes, there is a serious aspect to something like that. But it was handled well."

McIlroy is 1-under par for the tournament thru 36 holes, and likely to miss the halfway cut ahead of next week's Open Championship at Royal St George's.

"He was quickly dealt with,” said local golf fan David Wilson who witnessed the incident. "The players laughed it off, saying they knew he wasn’t a golfer when they saw his grip."

Another onlooker told The Scotsman newspaper: "He appeared on the tee, took the headcover off Rory’s driver in the bag then took out an iron and had a couple of swings with it.

"When someone told him that he couldn’t do that, he replied by saying ‘Why not?’ At that point, the security people assigned to following the group moved in and took him away."