Bluffer's Guide to Golf's Key Terms: How many do you know?

Do you know your Smash Factor from your X-Factor? We've got you covered the next time you go blank... 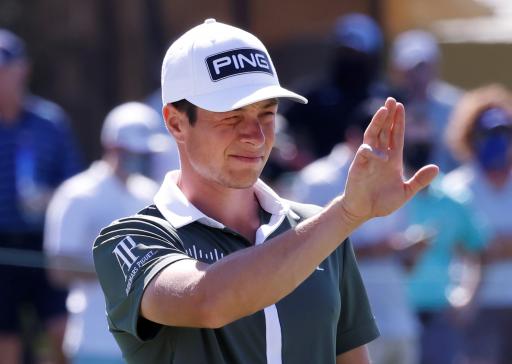 I remember it well. I was about two weeks into the job some 10 years ago and was sent out onto the road to meet a golf coach to have a look at my swing. All was going well until about 30 minutes into conversation when he mentioned about wanting to check out the X-Factor. I thought, that was a bit rude... could he not at least watch it on ITV Hub when he gets home later?

I quickly realised he wasn't being impolite at all, and neither Simon Cowell or Nicole Scherzinger had anything to do with my swing either.

He was actually referring to the difference in my turn angle on the backswing between my shoulders and my hips. Obviously.

With so many unique golfing terms out there these days, I thought I would put together the following A-Z list with quick-fire, one-line definitions to help you guys and girls out when it comes to a word or phrase that may next time leave you scratching the surface.

Angle of attack: The relative angle at which the clubhead approaches the ball at impact which, in turn, helps determine the distance and trajectory the ball travels.

Arcing: The player will tend to rotate the putter head open (as in the full swing), and then return it to square at impact. After impact, it will move back to the inside and then begin to close.

Axis: Refers to a straight line (the spine) that the upper body rotates around in the course of the golf swing.

Bladed shot: Also known as a "skull", it occurs when the top half of the ball is struck with the bottom portion of an iron, resulting a low-running shot.

Block: A swing in which the rotation of the forearms is delayed throughout the hitting area, generally producing a shot that travels to the right of the target.

Borrow: The amount of break (movement) a player allows when hitting a left-to-right or right-to-left putt.

Bounce: The curvy part of the wedge's head. Clubs with less bounce (0-10 degrees) will suit tight lies or golfers with shallow attack angles. Wedges with standard bounce (10-16 degrees) are less likely to dig into the ground and suit players with a steeper angle of attack

Bowed: Where the position of the wrists at the top of the swing sees the top wrist bent slightly inward, something we see with the likes of Dustin Johnson and Graeme McDowell.

Camber: The curve of the sole from the leading to trailing edge.

Centre of gravity (CG) on a golf club: The exact spot on a clubhead where all balance points intersect - a club with a low/deep CG will hit the ball much higher than a club with a high/shallow CG.

Clubhead speed: The measurement, in miles per hour, of how fast the clubhead is travelling at the point it impacts the golf ball. A launch monitor records clubhead speed.

Cocked wrists: The hinging motion of the wrists during the backswing where the hands are turned clockwise. Ideally, the wrists are fully cocked at the beginning of the downswing.

Effective loft: The actual loft on a club at impact as opposed to the loft built into the club. It is determined by the lie and the position of the hands relative to the ball at impact.

Fat shot: When the clubhead strikes the turf well behind the ball, resulting in poor contact and a significant loss of distance.

Flange: A portion of the sole of a club such as a sand wedge or putter.

Flat Swing: A swing that is more horizontal and less vertical in plane.

Flier: A shot struck out the intermediate rough or rough that reduces the amount of backspin on the ball, causing it to fly lower and further than normal.

Getting stuck: When the lower body is out of sync with the upper body, meaning the right elbow gets stuck behind the right hip, so the club comes too much from the inside. This will lead to push shots or the player trying to save the shot with their hands and hooking it.

Grain: The direction which grass grows on a putting surface, which can affect how much and in which direction a putt breaks.

Gimme: A very short putt close to a hole, awarded by other players, generally in matchplay golf.

Grind: The additional shaping of the sole of the wedge, usually around the heel or the toe. Companies offer a range of sole grinds in addition to a standard wedge sole, grinding the soles with a machine to suit specific turf conditions or shots.

Heel and toe weighted: A club design where weight is distributed towards the heel and toe of a club to reduce the effect of mis-hits.

Hook: A shot that curves sharply from right to left for right-handed players.

Hosel: The part of the club that connects the shaft to the clubhead.

Interlocking grip: A right-handed player using this grip will interlock the little finger of his right hand with the index finger of his left hand (vice versa for lefties).

Kickpoint: The region of a golf shaft at which the shaft exhibits the greatest amount of bend when the tip is pulled down.

Launch monitor: An electronic device that measures various aspects of what happens to a golf ball when it is struck by a golf club. It can be used to improve a golfer's swing as part of a lesson or to aid the custom fitting process when purchasing new clubs.

Lie angle: The angle of the sole of the club relative to the shaft.

Matchplay: A scoring system in which a player or team earns a point for each hole in which they have bested their opponents.

Mulligan: When hitting a second ball without penalty, usually on the first tee.

Open clubface: When the heel of the clubhead is leading the toe, causing the clubface to point to the side of the target. At the top of the backswing, the club is "open" if the face is vertical or perpendicular to the ground, often resulting in a slice.

Outside-to-in: A swing path when the clubhead approaches the ball from outside the target line and then continues to the inside of that line following impact.

Punch shot: A low-flying shot played with an abbreviated backswing and finish. The key to the shot is having the hands slightly ahead of the clubhead at impact, thereby reducing the effective loft of the club.

Radius of a wedge: The gradual curve of the leading edge as you look down at the head in the address position.

Shank: It's when a golfer hits the ball with any part of the club other than the face. This is hard to do, since a golf club doesn't have a lot of parts. The hosel is the main offender.

Smash Factor: The ball speed divided by club speed. "Smash factor" relates to the amount of energy transferred from the club head to the golf ball. The higher the smash factor the better the energy transfer. According to club fitters, 1.50 on driver shots is ideal.

Spin rate: The rate of rotation of the ball (backspin) around the resulting rotational axis of the ball immediately after the ball separates from the clubface. Useful for teaching and determining the correct club/ball for your swing.

Sweetspot: The point on the clubface where, if it is struck with an object, the clubface will not torque or twist to either side.

Swingweight: A measure of how the weight of the club feels when you swing it. It is important because if your clubs do not match in swingweight, they may not all feel the same to you during your swing.

Takeaway: The movement of the club at the start of the backswing.

Vardon grip: The little finger of the right hand (for right-handers) overlaps the forefinger of the left hand.

X-Factor: The difference in the turn angle on the backswing between the shoulders (upper body) and the hips (pelvis).

Yips: A psychological condition causing a player to lose control of his hands and club.

Got a golf word you're unsure about? Head over to our social media channels and let us know, and we'll answer it for you.