Why YOU should consider using ONE Length irons like Bryson DeChambeau

We tested ONE Length irons like Bryson DeChambeau to find out why they seem to work so well for the 'Mad Scientist.' 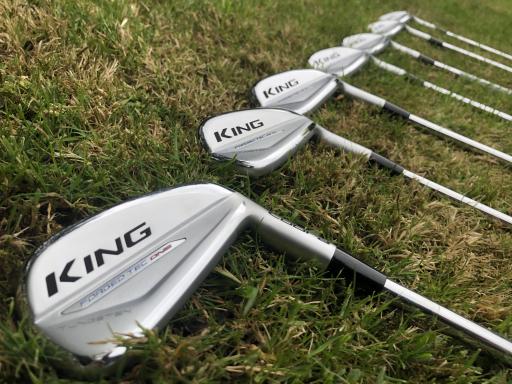 Now whether you like him or not there is one man who everyone is talking about on the PGA Tour right now and that is Bryson DeChambeau. He’s piled on the pounds and not only is he hitting absolute bombs off the tee but he’s also playing some very good golf from the fairways.

As many of you know, DeChambeau plays the game a little differently and uses Cobra ONE Length irons meaning all of his irons are the same length.

This was something he started experimenting with when he was 15 after reading a book about swing planes and after toying with the concept he figured that using a set of irons that are all one length would provide a more consistent swing plane across the set.

Having never tried ONE Length before and with DeChambeau playing so well at the minute, I thought I’d give the Cobra Forged Tec ONE Length irons a go, so watch the video below to see why YOU might want to consider using one-length irons.

After testing a full set of Cobra Forged Tec ONE Length irons (4-PW), the results certainly took me by surprise.

I thought that I would struggle with the PW and 9-iron at first as it would feel very unnatural using irons that are typically very short but in this set-up the length of a 7-iron.

Starting the test with the PW, I instantly loved the feel of ONE Length and was hitting consistently pure shots, so good that in my head I was immediately thinking maybe ONE Length was something that I'd like to switch to.

The numbers I was getting with the Sky Trak launch monitor were very promising, with spin rate averaging around 7800rpm, launch angle at 25.5, ball speed around 102mph, carry at 136yds with a total of 145yds.

Similarly with the 9-iron, the feeling of using a short iron in the length of a 7-iron felt really good and numbers were again excellent. Ball speed was at 106mph, spin around 7250rpm, launch 22.6, carry around 146yds with a total around the 155 mark.

Now when I moved on to the 5 and 4 iron, I thought this was where I’d really start to feel the benefits of one length but it just wasn’t going the way I’d hoped. This was only my first session using ONE Length irons so of course with more practice I’m sure I’d adjust but I just couldn’t quite get to grips with the 5 and 4 iron being the length of a 7 iron.

They were coming out a little low for me and I felt as though I was just swinging a little awkwardly as I was trying to add a little more speed to compensate for the loss in length.

Launch angle with a 5 iron was coming out at an average of 11.2 and with a spin rate of around 3600rpm. Now that’s not too bad but if I was striking a 5 iron like that out on the course I think I’d struggle to hit as many greens. Carry was averaging 183 with a total of about 200 yards.

Long irons aside, I can completely understand and see the benefits that come with using the Cobra Forged Tec ONE Length irons and it's obvious why they have become so popular among amateur golfers.

Personally, I feel as though I'm a pretty strong iron player and I'm comfortable changing swing planes with each iron, but that's not the case for everyone out there.

If you're a player who struggles with iron consistency and you're not hitting as many greens as you'd like to, then ONE Length irons could be perfect for your game.

They eliminate the need to adapt your swing with each club and could seriously improve your iron game, so if you are struggling on the fairways, make sure you give ONE Length a go when buying a new set of irons.

If they work for DeChambeau, they can certainly work for you...