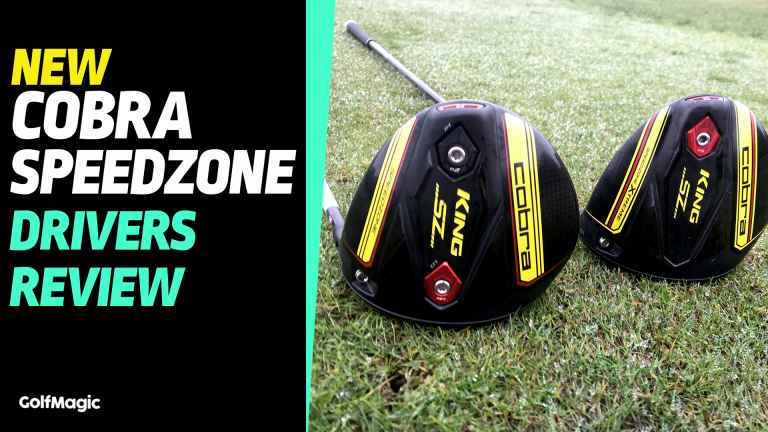 Last year, the COBRA F9 SPEEDBACK driver took the market by storm and became one of the most popular big sticks in the game. This year, COBRA Golf has raised the bar yet again with the new SPEEDZONE drivers.

After learning everything we needed to know in Miami for the launch of the SPEEDZONE drivers, we recently put them to the test at Farleigh Golf Club, where we used them on the range, out on the course and indoors with our SkyTrak monitor and TaylorMade TP5 golf balls.

For all the information you need about the new SPEEDZONE drivers from COBRA Golf, watch the video below.

In the new SPEEDZONE drivers, Cobra Golf has tapped into the world of super cars to optimise six unique zones of performance to deliver unrivaled speed and distance in two new drivers, the KING SPEEDZONE and the KING SPEEDZONE XTREME. Like a racecar, every component from the internal chassis design to the exterior shaping was engineered to maximize power output. Below is a rundown of the six zones of performance COBRA delivers in its 2020 SPEEDZONE Driver line.

1. POWER ZONE – CNC Infinity Milled Face - the face is the engine of the driver and is crucial for generating speed. Using the only CNC Milled Face in a driver, COBRA has expanded the milled area of the face by 95% enabling them to control face &amp; leading-edge thickness. Face and perimeter curvature can be up to 5 times more precise than traditional face polishing. In addition, every face is 100% inspected to ensure a larger SPEEDZONE across the face for maximum ball speed.

3. LIGHT ZONE – The new SPEEDZONE chassis allows for more carbon fiber than ever before.  A 360 Carbon Wrap Crown design makes up 50% of the driver body, providing ample stiffness and support to the chassis while saving 25 grams of discretionary weight. That weight has been repositioned low and back and around the perimeter where it is needed most.

5. AERO ZONE – combining aerodynamics with a low center of gravity continues to be a strength that COBRA delivers with its drivers. The new SPEEDZONE shaping harnesses airflow for maximum drag reduction and increased clubhead speed.

6. STABILITY ZONE – High speed stability is both important in racing and in driver performance. SPEEDZONE’s High MOI Design positions weight away from the center of the head to maximize stability on off-center hits for longer, straighter drives.

We fell in love with the COBRA F9 SPEEDBACK driver as soon as we saw it last year, but the new SPEEDZONE drivers feel like a step up in every way.

From a design point of view, COBRA hasn't steered too far away from the F9, a smart move given how everyone loved the look of last year's driver, but the SPEEDZONE drivers seem to have that 'mean looking' edge to them.

The black and racing yellow combination works brilliantly and this will be one of the most stand-out drivers of 2020. The racing elements of the driver make it even more attractive, with the small details such as the weights looking like exhaust pipes.

We absolutely love the infinity face and the fact that you can see it from address, while the CNC Milling process is one of our favourite aspects of the SPEEDZONE drivers.

In terms of statistics, of course everyone will have different results, but the SPEEDZONE drivers were long and consistent with a really nice sound to them.

The SPEEDZONE XTREME will be very popular in the market this year, as it provides a lot of forgiveness but it's still one of the longest drivers available.

The low-spinning SPEEDZONE driver is perfect for those low handicap players who love to work the ball, but we think even the best of players will get a lot out of the SPEEDZONE XTREME too.

With a price tag of £349, the new drivers from COBRA are one of the most affordable new drivers on the market this year. If you're thinking of adding a new big stick to your bag, make sure you give both of these drivers a go.