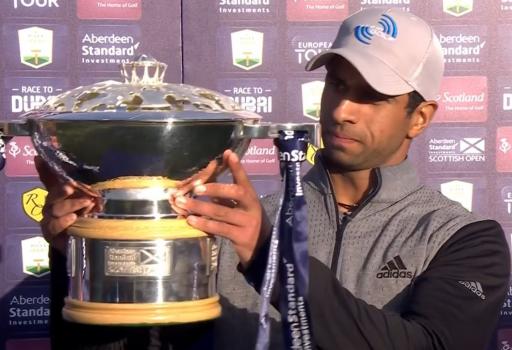 Aaron Rai can now call himself a Rolex Series champion for the very first time after beating Tommy Fleetwood in a play-off to win the Aberdeen Standard Investments Scottish Open at the Renaissance Club.

After carding a final round of 64, Rai waited patiently as his tournament score of 11-under par was being chased by the final pairing of Tommy Fleetwood and overnight leader Robert Rock.

It looked as though Rock and Rai would be heading for a play-off, but Rock's decision to chip from the fringe of the 18th green cost him as he made a bogey and took himself out of contention.

Fleetwood had to make birdie at the last if he was to force a play-off and the Englishman proved why he is one of the best in the world when he rolled the putt into the hole.

It was advantage Fleetwood as the two teed off down 18 once again, with the World No.17 splitting the fairway and Rai finding the bunker.

Rai was forced to lay up but played his third to perfection, leaving a short putt to save par, whilst Fleetwood failed to capitalise and left his approach short.

A second play-off hole looked all but guaranteed, until Fleetwood was unable to convert from around three feet, handing victory to Rai.

“Both times I was fortunate to be far enough back from the lip that I could almost make the green,” said Rai, who came close to winning last week, finishing runner-up to John Catlin.

“And it definitely helped me the second time round that I knew what to expect from the shot. I was still thinking 4 would be a great score though. And I was lucky, too, that the flag was so close to the front of the green. If it had been a back pin, I probably wouldn’t have made par both times. But you always need a little bit of good fortune. That was mine. And of course I wasn’t expecting Tommy to make 5.”