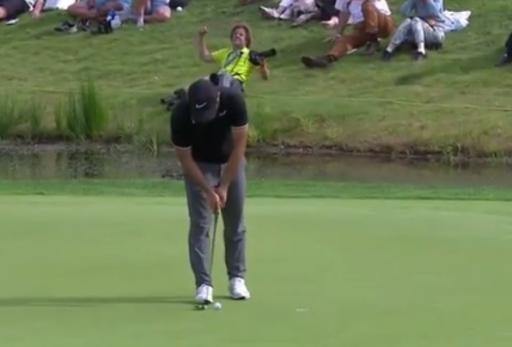 So you've been following the final group of the European Open for the best part of five hours now. You're quite frankly on your legs having carried three different cameras, lenses and bags as the tournament goes into a sudden-death playoff.

You're absolutely knackered, but the time has arrived. The winning moment. You've got the shot, you've got your position on the bank and you've text your boss to alert him images are on their way. Alex Levy has cosied his ball up to three feet for the win. The background is set. Champagne corks and French colleagues are ready to run onto the green, and you've got the whole situation covered.

Putter head back and through, ball into the cu... oh for f*** sake!

Watch the moment Alex Levy misses his putt at the first extra hole to win the European Open. We're pretty sure the photographer is more disappointed than the Frenchman...

And it was to prove costly as England's Jordan Smith went on to win the tournament with a birdie at the second extra hole.

We can only hope the photographer caught that one. Or maybe he just went for a pint in the 19th.