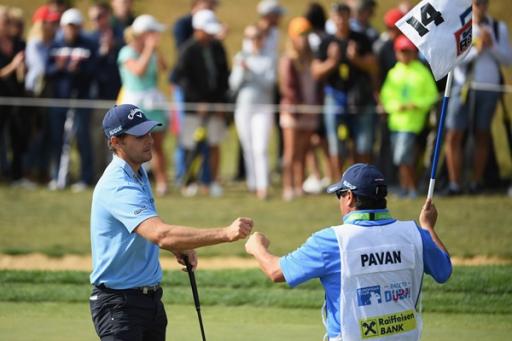 Andrea Pavan sealed his maiden European Tour title with a two-stroke victory over Padraig Harrington at the Czech Masters at Albatross Golf Resort.

Pavan, 29, was locked in a final-round tussle with three-time major champion Harrington and found himself three strokes down with nine holes to play.

But five birdies in the space of eight holes from the 10th saw the Italian race in front of the Irish veteran, who could only post a level-par back nine.

RELATED: PADRAIG WANTS A CRAFTY WEE IN THE TREES, CAMERAMAN TRACKS HIS EVERY MOVE!

Pavan finished on 22-under par with Harrington back on 20-under.

The four-time Challenge Tour winner had been knocking on the door for a win this season following three top-10 finishes on the main circuit, including a tie for sixth at last week's Nordea Masters.

Asia's number one Gavin Green finished five back in solo third on 17-under, with British duo Lee Slattery and Scott Jamieson on 15-under.