Is it a boy or a girl? Bill Murray lets rip on the tee. 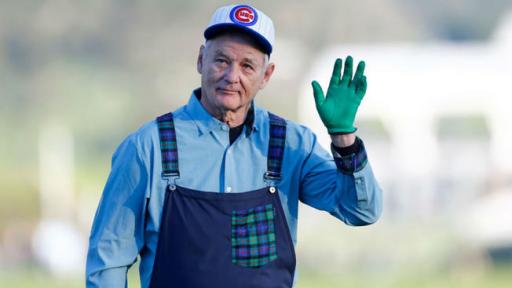 Actor Bill Murray surprised a couple by helping them with gender reveal by hitting a golf ball.

Jacqueline and Michael Davis from Florida took a golf ball that was filled with powder inside to tell them the gender of their baby to the Murray Bros Caddyshack Golf Tournament in St Augustine last week.

But when they got to the planned tee, they were surprised to find Murray there waiting for them. Watch below...

'(Murray) said it was his first gender reveal,' Jacqueline told the News Journal. 'I was very happy, very excited.'

Murray also gave them the pink driver he used to hit the ball.

They plan to give the club to their son when he is old enough.

'We're going to frame the driver (until then),' Jacqueline said.

In one of Murray's first feature roles in 1980, he plays bumbling groundskeeper Carl Spackler in Caddyshack.