Boy, 11, hits TWO holes in one in the span of seven holes at junior tournament

What are the odds of this? Well, one in 67 million. 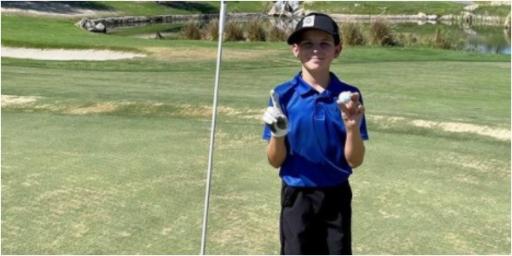 Statistically many of us hacks will go through our lifetimes without getting a hole in one - let alone two in the same round.

But one young man from the state of Arizona in America has accomplished the feat at the age of just 11 years old, according to golfwrx.

They report that during a kids' golf tournament, little Jake Martinez bagged two aces in the span of just 11 holes.

The odds of accomplishing such an achievement are reportedly one in 67 million, but that didn't seem to matter for Martinez.

Martinez, pictured with a beaming smile, was playing in the Palm Springs Open, and made a double bogey at the first hole.

Jake Martinez of Arizona did that at the 2021 U.S. Kids Golf Palm Springs Open for the first two aces of his life! Congrats, Jake! #uskidsgolf pic.twitter.com/amQmYSaW9w

But he seemed to turn it round and he recorded an ace on the fifth hole measuring at 95 yards.

At the 12th hole, Martinez reportedly was told by his father that it was measuring at 100 yards so he tried to "draw on in there".

He told golfwrx: "It's 100 yards, so I hit pitching wedge again. My dad says the exact same thing, aim left, try do draw it in there.

"It does the exact same thing as the last one, it hits and then drops. We were all just in awe."

It's a shame Martinez did not win the tournament, as he reportedly recorded a first round 74 and followed it up with a 76 to finish in 14th.

What's that saying? A bad day at the golf course is a better day than spending it in the office.

NEXT PAGE: WILL THE UNITED STATES REGRET NOT PICKING PAT REED?