Will the United States REGRET not picking Patrick Reed at the Ryder Cup?

Was Captain America's health just a convenient reason to not inlcude him? 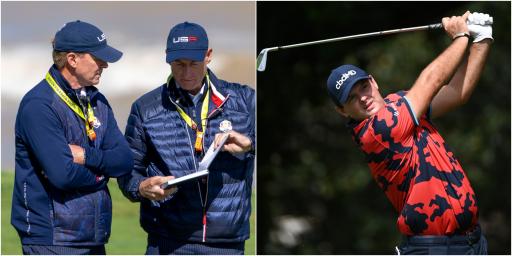 The Ryder Cup is a results based business - win and you're a hero but lose and everything is questioned.

This is why Patrick Reed's omission from the team may well be scrutinized if the Americans fail to win back the Ryder Cup.

Usually, Ryder Cup captains talk about getting experience in their sides with their wildcard picks.

U.S. captain Steve Stricker has opened himself up for criticism by not selecting Reed who has performed so well for his nation.

It takes a lot of guts and nerves to make a call this big - but if it were to backfire - it will surely land Stricker in hot water.

His back-and-forth tussle with Rory McIlroy at Hazeltine in 2016 was on par with the drama of the Rumble in the Jungle.

RELATED: IS THIS THE WORST RYDER CUP HECKLE OF ALL TIME?

Reed knows how to get it done at the Ryder Cup and his health issues may have been a blessing in disguise for Stricker not to pick him.

Captain America recently battled a bout of pneumonia and claimed he is lucky to be alive.

He reportedly took the snub well and "said all the right things".

But whoever was in charge of his social media account was liking Tweets that were critical of Stricker's decision.

It's the world's worst kept secret Reed is not well-liked by his contemporaries.

DeChambeau also seems to not be winning any popularity contests any time soon.

No matter how many silly PR videos the U.S. camp pump out - we know the score.

Should Strick have chosen Reed and paired them together?

They'd have shown all the fire, passion and determination to win - that's what you want.

The Europeans have veterans who know what they're doing and this will be a baptism of fire for Stricker's young side.

It is a massive call, but whether it will turn out to be the right one will be fascinating to find out.

NEXT PAGE: G-MAC QUESTIONS WHY THE AMERICANS CHOSE THE STRAITS