Brooks Koepka reveals he has not picked up a golf club since defending the US PGA Championship. 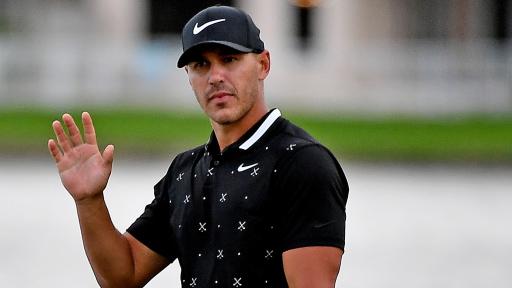 Brooks Koepka has revealed he does not care about his result at this week's Canadian Open, just as long as he's feeling confident going into next week's US Open where he will attempt to win a fifth major title in his last nine starts.

Making his first start since successfully defending the US PGA at Bethpage Black three weeks ago, the World No.1 was asked by the media how his game was looking heading into his tune-up tournament before the US Open at Pebble Beach.

"I don't know," said Koepka. "I've not touched a club. I’m not too concerned with it. From the nine holes I did play today, it seemed pretty good."

Koepka has typically taken some time off after a major tournament, but enjoys playing the week before a major tournament despite the fact he won consecutive US Opens having finished 30th or worse in each of his tune-up starts at the FedEx St Jude Classic.

The big-hitting American is not too bothered about his result in Canada this week, but just wants to feel as though his game is where it needs to be heading to Pebble Beach - a venue he has only played once when finishing tied eighth in 2016.

"The result doesn’t really matter this week. It’s just how I feel I’ve played. Am I hitting enough good shots and really finding a rhythm?"

Koepka is attempting to become the first golfer to win three consecutive US Open titles since Scotland's Willie Anderson in 1905.