The ongoing war of words between Brandel Chamblee and Brooks Koepka continues... 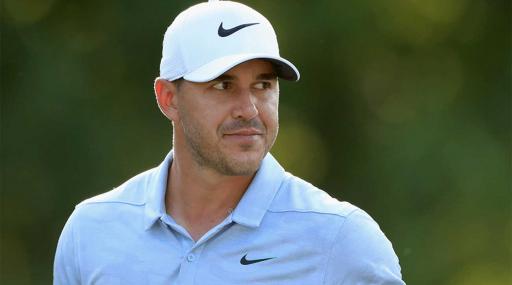 Brandel Chamblee has claimed Rory McIlroy and Dustin Johnson are the ONLY players capable of challenging Tiger Woods as the world's best golfer right now - and it's fair to say Brooks Koepka wasn't best pleased with the golf analyst's comment.

And rightly so given Koepka has won three of the last seven majors and sits three rungs on the ladder (third) ahead of Woods (sixth) in the Official World Golf Rankings.

Koepka's good friend Johnson enjoys his 90th cumulative week as World No.1, narrowly ahead of England's Justin Rose, while McIlroy comes in at fourth with Justin Thomas in fifth.

RELATED: ONLY 2% OF FANS CAN IDENTIFY THE WORLD'S TOP 64 PLAYERS!

“My coach sent me the tweet, he sent it it me and said, ‘I think you should see it,’ so I saw it and I responded,” said Koepka, who starts a warm favourite at this week's AT&T Byron Nelson on the PGA Tour.

“Yeah, I mean everybody on my team, everybody around me and close to me knows what’s going to get me fired up or what makes me pay attention a little more. You tell me I can’t do something and I can’t wait to prove you wrong.

“I’ve got a group text with a bunch of buddies, there’s about 12 of them. I don’t know who sent it, one of ‘em sent it, I thought it was pretty funny.

“I sent them the whatever, the tweet, and that was the first one they sent, and I just went with it, man — a picture’s worth a thousand words.”

Chamblee was also quick to criticse Koepka for losing weight for what he claimed "vanity reasons" ahead of The Masters, where he went on to finish one stroke behind Woods.

The outspoken golf analyst believed the 29-year-old shedded some pounds in order to look good for ESPN's 'The Body Issue' which he is rumoured to be taking part in this season.

“He’s done it a lot, he’s always got an opinion on something,” said Koepka.

“And I don’t really respond too much. I know he said a bunch of things at Augusta and I never responded, that’s not really my style. But there comes a point where you just don’t care, and like I said, a picture’s worth more than a thousand words.”

Koepka will look to win his fourth major title in eight starts at next week's US PGA Championship at Bethpage Black.