Koepka seeks every possible advantage alongside his caddie and Portrush member Ricky Elliott. 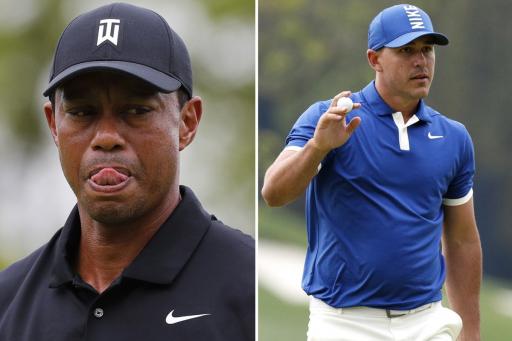 Tiger Woods has told how Brooks Koepka snubbed his request for a practice round at Royal Portrush ahead of this week's Open Championship.

Woods, who is seeking a fouth Claret Jug, had never seen Portrush prior to his 18-hole practice round alongside Patrick Reed, before then joining Dustin Johnson and Rickie Fowler for a game.

The 15-time major champion, however, did ask if Koepka fancied joining him for a practice round. Only he left him on 'READ'.

"I said, 'Hey dude, do you mind if I tag along and play a practice round?'" Woods told the media of his message to Koepka. "I've heard nothing."

THE OPEN: TIGER UNIMPRESSED WITH STATE OF HIS GAME

Koepka, who is bidding to win his fifth major title in his last 10 major starts this week, would appear to be keeping his cards close to his chest this week, especially with his caddie Ricky Elliott being a Royal Portrush member.

An advantage Koepka believes will put him 1 up on his competition from the opening round.

“Every hole I just step up on: ‘You tell me what to do. You’ve played it more than anybody,’” said Koepka.

“So I just let him figure it out. He knows his spots to miss it, the spots to come in from. I’ll definitely have a little bit more confidence having him on the bag this week, knowing this golf course so well.”