DeChambeau takes an age over 10-foot putt and even paces off a 70-yard wedge shot at The Northern Trust. 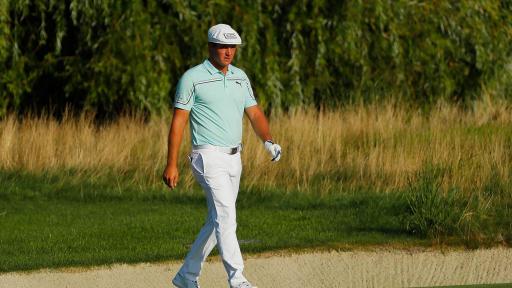 Bryson DeChambeau is all the talk of the golfing world yet again this week following another act of slow play during The Northern Trust last week - in particular his second round at Liberty National.

DeChambeau caused outrage with golf fans, commentators and fellow players alike after taking 2 minutes 20 seconds to putt out from within 10 feet on the 8th hole.

The putt did not even come close to going in as the American named the 'Mad Scientist' blazed his ball right of the cup and some four feet past the hole.

Watch the video below to see DeChambeau take an age over his putt. The reactions of his playing partners Tommy Fleetwood and Justin Thomas say it all...

But there was more.

DeChambeau was also seen pacing out a 70-yard wedge shot on the 16th hole during the same round on Friday.

An errant shot left DeChambeau with around 70 yards to the hole, but it would take him a full three minutes to figure it all out.

With Fleetwood and Thomas waiting patiently up by the green, DeChambeau walked slowly on a direct line from his ball, down a hill, then up another hill and onto the green.

Can you imagine spending three minutes to pace off a shot from 70 yards during your Sunday Medal?!

Watch the video below to see what happened...

anyone need a nap?

here’s DeChambeau pacing off a 70-yard shot which took over 3 minutes to hit (couldn’t post the entire video it took so long) pic.twitter.com/7A3Azeftyu

“As I suspected, once he gets everything figured out here, it’s actually a very straightforward shot,” the patient broadcasters reported as DeChambeau continued to analyze the shot.

“I’d love to see Bryson DeChambeau just play nine holes with his buddies, speed golf, couple of beers in tow, and see how he does without all the analytical stuff that goes into it. Could he do it?” asked one of Golf Channel’s play-by-play announcers.

“You need to be an aeronautical engineer to be his caddie,” joked his partner in the booth.

“I mean this is tough for his playing partners, I’ve got to be honest, when you’re standing around waiting with all of this going on.”

DeChambeau is regarded as one of the game's laborious players following a string of recent slow-play antics in recent years, and he was recently slammed by World No.1 Brooks Koepka for his snail-like behaviour on the course.

Bryson finished the week in a tie for 24th on 7-under par, nine strokes behind winner Patrick Reed.

RELATED: Bryson DeChambeau warns Koepka to "say it to my face" regarding slow play comments