Bryson DeChambeau tells someone to "quiet down" during Northern Trust

Golf fans have rinsed Bryson DeChambeau on Twitter after he confronted someone during the first round of The Northern Trust. 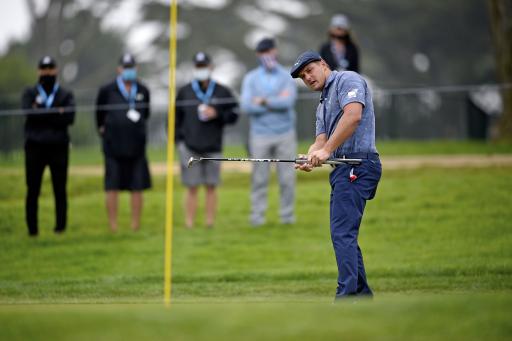 Ahh the enigma that is Bryson DeChambeau. One minute people are completely wowed by his game-changing distance and then before you know it he's got golf fans tweeting about him for all the wrong reasons, but we wouldn't have it any other way.

There's no question that DeChambeau will go on to accomplish some brilliant things in this sport, having already racked up six PGA Tour victories, his last coming at the Rocket Mortgage Classic just last month.

His decision to pile on the pounds and seek more distance was widely scrutinised, but he has already proved that having the ability to smash the ball over 400 yards does have its benefits and if he works on his wedge game, it won't be long until this man is winning multiple majors.

Talent aside, he certainly raises a few eyebrows now and then and the 'Mad Scientist' was at it again during the opening round of The Northern Trust at TPC Boston.

DeChambeau shot a level-par round of 71 on Thursday and ultimately missed the cut, but it seems someone on the course managed to upset him, so the 26-year-old decided to speak up.

Bryson DeChambeau already on tilt and mad at someone other than himself: “Sound travels.” pic.twitter.com/o6ia4DK2Ob

You do wonder who DeChambeau was talking to, given that there are still no spectators at PGA Tour events and it was unlikely to be players, caddies or cameramen.

Now DeChambeau didn't exactly scream at whoever it was and he did say please, but his sarcastic comment that "sound travels" was probably a bit unnecessary and is likely to be what riled up the golf fans who took to Twitter to take a dig at the American.

The world really divided into two types of people in 2020...

...those that really dislike Bryson DeChambeau and those who don’t watch golf.

Bryson DeChambeau just asked some spectators to be quiet and it really bothered me. I respect the quiet nature of golf, but if you can't handle a little bit of chatter 50 yards away then just pack up your clubs and go home.

“Mind talking a little quieter over there please? We can hear you all the way over there...sound travels”

It’s every week with this guy, huh? pic.twitter.com/q6pW36FlHg

Bryson DeChambeau at it again with the non existing fans. pic.twitter.com/vodLOjNHI7

NEXT PAGE: How much Dustin Johnson and every player won at The Northern Trust