Christiaan Bezuidenhout wins the Andalucia Masters for his first win on the European Tour, but his career certainly hasn't come easy for him. 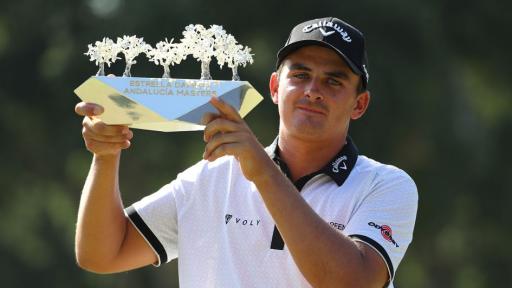 At the age of two, Christiaan Bezuidenhout took a sip from a Coke bottle that had been contaminated by rat poison and was rushed to hospital. His stomach was pumped to save his life, but the poison had already spread into his nervous system, causing the South African to deal with challenges he has faced all his life, but now, he's a European Tour winner.

One of the issues the poisoning caused was a severe stutter, that during Bezuidenhout's younger days caused anxiety and depression, so bad that he didn't even answer his phone or want to speak at school due to the fear of being made fun of.

As a junior, his talent in golf was obvious, but he struggled to speak to event organisers and fans after his victories and in 2014, his career suffered another major setback.

Bezuidenhout was prescribed beta blockers by his doctor to treat the anxiety, but while playing in the British Amateur, he tested positive for the beta blockers. The South African was devastated, as he said he had filed the relevant paperwork for the medication, but he was labeled a drug cheat and banned for two years, which was later reduced to nine months.

“It felt like my life was over. I was inconsolable,” he said. “However, I eventually turned this into energy to help me come back stronger.”

Well he certainly did come back stronger. In 2017, Bezuidenhout was the Sunshine Tour Rooke of the Year. In 2018, he retained his European Tour card and this season has had five top 15 finishes before destroying the rest of the field to win the Andalucia Masters at Valderrama.

Bezuidenhout finished round four level par, to end the tournament -10, six shots better than the five players who shared T2. His win also secured his spot for the 2019 Open Championship at Royal Portrush in two weeks. Check out the interview below, where Bezuidenhout composed himself extremely well.