Only 14 people have ever birdied the famous 'Extreme 19th' at the Legend Golf & Safari Resort. 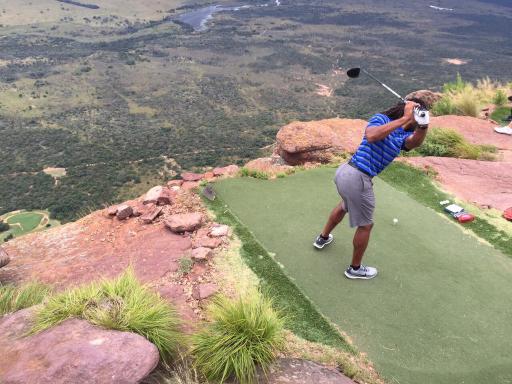 Every now and then you'll play a course you've never played before and you'll stumble across a picturesque par-3 that blows you away, but have you ever seen one that is so high you have to take a helicopter to get to the tee?

The 'Extreme 19th' at the Legend Golf & Safari Resort in the Entabeni Safari Conservatory in South Africa, is 395-yards long and 400 metres high, so if you're not a fan of heights, this might not be the hole for you.

The resort is a two-and-a-half-hour drive from Johannesburg, the largest city in South Africa and the green of the Extreme 19th is shaped to resemble the continent of Africa.

Now although the par-3 is close to being 400-yards long, due to the tee being so high off of the ground, you of course don't need to be able to hit the ball that distance to find the green, but it certainly looks like a small target once you've taken a helicopter ride up to the tee box.

Watch the video below to see the hole for yourself:

The most incredible, and difficult, par 3 we’ve ever seen!

Welcome to the Legend Golf & Safari Resort in South Africa.

Only 14 golfers hold the honour of having made birdie at the Extreme 19th, including former Cricket player Franklyn Stephenson, whilst a number of other famous faces have taken on the challenge.

Padraig Harrington, who designed the South African golf course alongside a host of other professionals such as Sergio Garcia and Justin Rose, became the first player to par the Extreme 19th when he first took on the challenge.

Other famous faces have flown to South Africa to face the nervy par-3, including Carly Booth and American Football player Larry Fitzgerald.

Extreme 19th hole at the Legends course in South Africa. Longest par 3 in the world. Don't ask what I made on it ! pic.twitter.com/NMOSbKBhK7

NEXT PAGE: Golf fans take aim at Bryson DeChambeau for telling someone to "quiet down" at The Northern Trust