Dad introduces his little boy to golf and his instant reaction is HILARIOUS!

Welcome to the game of golf little man... we can all relate to this! 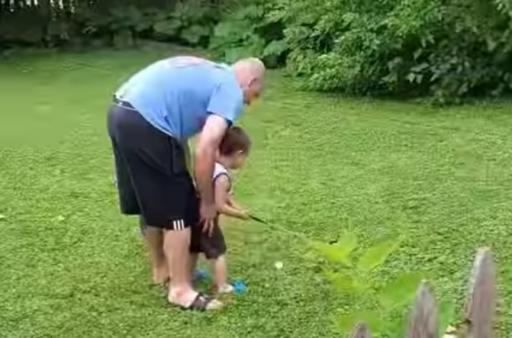 A video of a little lad getting to grips with the game of golf for the first time in his back garden has gone viral this week, and it's fair to say his reaction is relatable to just about all of us budding golfers!

The video, which was initially posted on Instagram by f***jerry.tv and later shared by the popular Long Drivers account, has received hundreds of comments in the last 48 hours.

A man is seen handing his little boy a cut down golf club in his back yard.

"Introduced my boy to the game of golf [laughter emoji]," read the caption on the video.

After the dad gets his boy into position in order to hit the golf ball, he moves away as to avoid getting struck in the face.

The kid then instantly takes two swipes at the ball but fails to hit it.

Enough is enough, he says to himself.

The boy then attempts to strike the ball with his hand but once again misses the ball.

In the heat of the moment, the young man then boots the ball twice like a young Ryan Giggs before picking it up and hurling it like Tom Brady across the lawn.

Don't worry dude, we've all been there at some point in time!

At least if he does decide golf isn't quite for him over the coming years, at least he has soccer or American Football to fall back on.

NOW WATCH: Nobody can quite believe that this is actually Jesper Parnevik!