Nobody can quite believe that THIS is actually Jesper Parnevik right now!

Jesper Parnevik is rocking a very different look on the PGA Tour Champions these days... 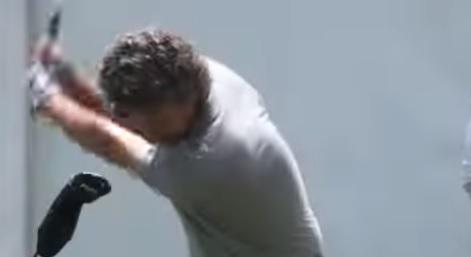 Golf fans have been reacting to seeing Jesper Parnevik rocking a very different style these days on the PGA Tour Champions.

Parnevik, 57, has five PGA Tour titles to his name, including four wins on the European Tour.

The Swede has also played in three European Ryder Cup sides down the years, twice finding himself on the winning side back in 1997 and 2002.

Parnevik is also credited with having introduced Tiger Woods to Swedish au pair Elin Nordegren, who was previously employed by Parnevik.

Woods eventually married Elin but then in 2009 Parnevik said that he regretted his responsibility for introducing him to her after reports emerged of Woods' infedility that year.

Many golf fans will remember Parnevik wearing a cap with a flipped up peak during his time on the PGA Tour and European Tour. But fast forward to the present day on the senior circuit, and it's fair to say Parnevik has gone for an entirely different look.

"Is that Shooter McGavin," commented one golf fan after seeing Parnevik swinging away on the range at the Insperity Invitational on the PGA Tour Champions last week.

PGA Tour Champions posted a video of Parnevik with the caption: "Who is this swinging on the range? Wrong answers only."

Parnevik finished 1-under par last week in a tie for 37th, 17 shots behind winner Steven Alker.

Next Page: Greg Norman hits out at Phil Mickelson over his recent comments