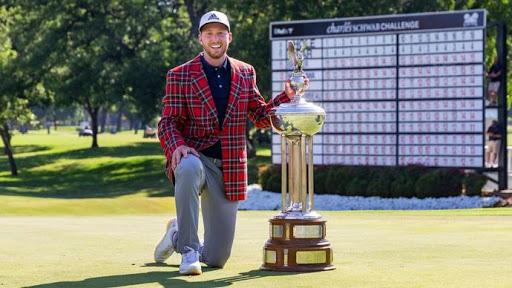 Daniel Berger ended his three-year wait for another PGA Tour title on Sunday, after he scratched and clawed his way into a playoff at Colonial to beat Collin Morikawa and win the Charles Schwab Challenge.

The PGA Tour returned in style after being on hold for 91 days, with one of the most exciting fields we have seen for a very long time and Sunday's final round was certainly entertaining, despite the lack of atmoshpere without fans.

At least 10 players were still in with a chance of winning on Sunday and a handful of players will be kicking themselves after missing multiple opportunities to take the lead.

Berger made a fantastic birdie putt at the last to tie the lead, but it looked as though Morikawa would take the glory as he put his approach down the last just five feet from the pin.

A birdie at the 72nd hole to tie the lead.

Morikawa, who had been red hot with the putter all day, missed his chance to win as he pulled his short birdie attempt wide of the hole, sending the tournament into a two-man playoff.

Both players took an iron off the tee as they played the 17th for the second time on Sunday and the advantage went to Berger as he striped his down the middle, whilst Morikawa found trouble in the trees on the right.

Berger's approach was long but he chipped it close and tapped in for par, meaning Morikawa had what looked to be a simple four-footer to extend the playoff down the 18th, but the 23-year-old lipped out, handing victory to Berger, his third PGA Tour win.

What a way for the tournament to end.

Collin Morikawa's putt lips out to give @DanielBerger59 the victory.

A bulked up Bryson DeChambeau looked like he would at least be a part of the playoff but a mistake at 17 left the American with it all to do down the last and narrowly missed his birdie putt that would have seen him join Berger and Morikawa.

Xander Schauffele played brilliantly all week and he too looked destined for the playoff, but after nailing a few long putts, Schauffele lipped out of a short par putt at 17 and couldn't find the birdie he needed down the last.

Rory McIlroy looked to be in a strong position to chase the lead on the final day, but an uncharacteristic shank on the first hole set the tone for what was a horror show of an opening nine, where he shot a 6-over 41 and finished his final round 4-over par, dropping all the way down to T32 at 6-under for the tournament.